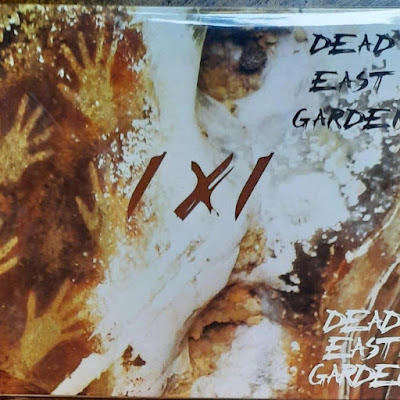 17:12.... Seventeen minutes and 12 seconds. If this were some type of challenge, you might ask yourself: "Just what could I do in seventeen minutes and twelve seconds?" ::silence:: I don't know what you could do, or maybe not do for certain, in that span of time but, I've definitely got a few ideas. First of them would be to roll a joint... no, hear me out now. I'm kind of a self unaware, undiagnosed perfectionist which in this case, manifests as doing things in an efficient manner. That's right, formulaic, step-by-step approaches to any type of life scenarios that, when translated, means gettin' shit did!

Right now, I'll say 17:12 sounds awfully damn good to me because I've been spending that exact amount of time enjoying some enticing, enthralling audio. Because seventeen minutes and twelve seconds is the running time of the 4-song debut EP from Cleveland, Ohio's DEAD EAST GARDEN. The contents of the "1 X 1" EP (pronounced as "One By One") are of nice diversity and scope, often involving stylistic morphs occurring at breakneck pacing. Put it this way, just as you feel you're settling into one particular musical mode here, it will get upended in an instant... then the process repeats, and repeats.... and then repeats again. Take heed of this for it is ultimately something you will discover here on your own: repeat listenings are your friend. Through each of them, they will reinforce the allure of DEAD EAST GARDEN's songwriting. Guitarist/vocalist Pat Homolish, bassist Lance Collier (also of After The Sun), and drummer R.J. Drenski match that with more-than-capable executing of their sonic constructs. The three cover a lot of changing aural terrain within these four tracks too, doing so with fluidity and ease. This claim will become clear once you begin descent into the receded grooves of the EP's first selection.

Opening roaster on the EP is the stagger, swagger, and loosened blues of "Junkyard". The roll-out is bombastic in build up but at :15 seconds in, there's a knee deep groove laid before you. Naturally, comparisons to Clutch, Mississippi Bones, or Five Horse Johnson may come (and in no way insult, of course), especially the latter two. While it may not get a lot of notice or focus from the underground press out there, Ohio most definitely has a geographic-specific sound, I assure you. While certain elements are nearly indescribable, I think the learned and enlightened of you will get what I'm laying down with the following name dropping. The two already mentioned, past and present others like Red Giant, Abdullah, LO-PAN, Valley Of The Sun, THAL (The Heathens Are Loose), The PB Army, Robot Lords Of Tokyo. If you truly know these bands then my case is made ::mic drop::

The funk heavy thickness of the densest fuzz-encased riffs ever brings us ear to ear with the EP's title cut, "1 X 1". This second song has an underlying bounce in its initial rendering of rhythms, ones hammered into place with bombastic drums and cymbal crashes. It's a slight misdirection, for our trio gear jams into position and dispel a tear ass on their instruments that is ferocious. They go winding through the paces in unison, stitched and riveted in place as a much angstier, shouted type of vocal takes over. This is thunderous electrified blues but it is tight-knit, packed with a coarseness like gravel in grit.

"Hey Man"... yeah, I'm talking to you, reading this right now and someone else definitely wants a word with you... two, in fact. "Hey Man" has become my personal favorite here, one with some cherry qualities, like its' infectious earworm nature. It's a mover and a groover, yet steeped with a vintage style to it, one that is unmistakably Sixties in influence. There's a levity permeating the notes, accompanied by some downright spectacular guitar work throughout. Not completely certain, but what I think is a slide guitar asserts itself and let's not kid ourselves... "Hey Man", nice song.

For the fourth, and EP finalizing composition, comes "One Way Ride", a song-based straight shot to being impressed. This is easily the most unique song of the four, feeling more of a seriousness being vibed and loosed upon high. There are heavy grunge elements amid a much harder edged delivery and a seriously strong vocal. Each member has their moment here individually, putting in work worthy of our attention. Overall, it is a stand alone statement as a song, separate and on its own, but when given with the other three numbers accompanying it, the math here is easy to articulate.

DEAD EAST GARDEN seem to fully understand the arithmetic of rock and roll. Take guitar, take bass, take drums, take vocals.... add talent, and crunch the numbers. They are going to come out "1 X 1" every time you try , and when applied to one another, the sum total is thoroughly enjoyable!