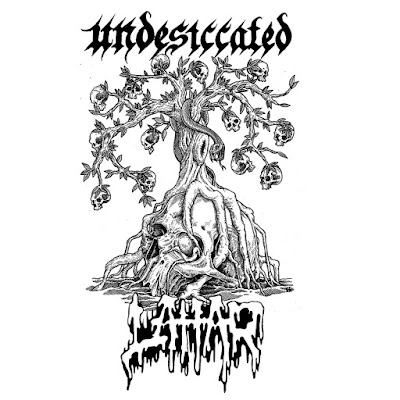 The ever-productive Undesiccated are back, this time with their first ever split, 'Peristeria & Tephra', and their partners-in-crime on this endeavor are Indonesia's Lahar. Undesiccated are a very familiar entity to me, whose music has thrilled me immensely since the amazing debut, 'Xylem', back in February 2019. Lahar, on the other hand are basically unknown to me, despite countless searches online to find out more. Regardless, what they bring musically is what matters and what they unleash on this cassette/ digital split speaks volumes, much more than any band info would.

The title of this split is rather telling and spot on, if you ask me. Peristeria is the genus of plants in the orchid family, and orchids are beautiful while Tephra are rock fragments and particles ejected by volcanic eruptions. In other words, it is created by brute unforgiving force. And that's exactly what this recording is. The eight songs on offer, four from each band, clock in at a total of 7:49 minutes, so it's furious, fast and brutal yet very beautiful at the same time. Hence the title. I might be wrong but that's what it means to me.

Undesiccated’s four contributions are intense, fast, furious, angry and in-yer-face. It wouldn’t be them if they weren’t. And I love how the guys, in the midst of dishing out unrelentless grind, play sweet straight-up metal riffs and give brief, very brief, bursts of room to breathe. Only to pummel the listeners to a bloody pulp the moment you drop the guard. And that’s one of Undesiccated’s biggest traits; they do whatever they want which makes for great music. It’s ugly, beautiful and bloody brilliant.

Lahar are equally intense and furious but slightly slower, well everything is relative, than Undesiccated but they bring a feel of Motörhead and punk into their grind. The compositions they unleash are an unrelentless force giving you no chance to hide. And that’s great with me. Give no respite, go for the jugular and rip it out.

Both bands give their all on this split and you can’t really ask for more. Pull out all the stops and let it all hang down while shredding humanity to tiny bloody pieces for what we are doing to Mother Nature. I’ve been pushing for Undesiccated since they first appeared and this split only enhance my fascination with them. Lahar have given me a purpose to search for their hard-to-find yet highly desirable music. This is a great badass release with a purpose….and I love it!