A Ripple Conversation with Kabbalah 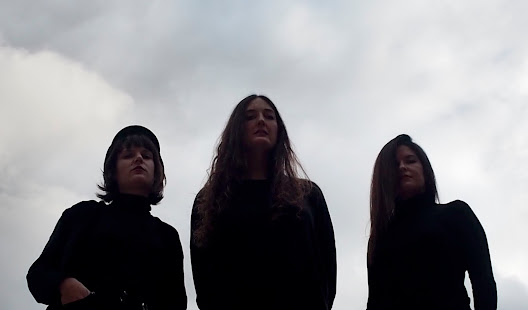 When I was a kid, growing up in a house with Cat Stevens, Neil Diamond and Simon and Garfunkel, the first time I ever Heard Kiss’s “Detroit Rock City”, it was a moment of musical epiphany. It was just so vicious, aggressive and mean. It changed the way I listened to music. I’ve had a few minor epiphany’s since then, when you come across a band that just brings something new and revolutionary to your ears.

CARMEN: The first ones I remember were with White Zombie, Astro-creep 2000. It was different from everything I had heard before. Also the first time I heard Danzig's "Going down to die".

ALBA:  One of them is at around 4-5 years of age, listening to Bohemian Rhapsody in the back seat of a car.

MARGA: I remember watching Aerosmith’s “Love in an elevator” videoclip on TV when I was a child. My family is catholic and very conservative, so that was like watching sin itself. And of course, I wanted to be like them. Later, when I was teenager, I began to listen to Black Sabbath which sounded diabolical to me, so perfect. That music... I just felt part of that.

Talk to us about the song-writting process for you. What comes first the idea? A riff? The lyrics? How does it all fall into place?

CARMEN: Usually an idea, it might be a riff or a base melody. Lyrics are always last.

We Usually bring ideas to the rehearsal place and make them evolve together.

ALBA: I would add to Carmen's answer that It all comes together when the three of us work in our individual instruments. What might have been a personal idea for a song or a riff suddenly becomes much more interesting when everyone in the band sees it and adds to it their own vision.

Who was influeced you the most?

CARMEN: Influenced the most... I don't know, but when we have a blackout with a voice line, we ask ourselves.. what would Ozzy do?

ALBA: It's impossible to pick one, but let's go with Carmen: when in doubt, ask "what would Black Sabbath do?"

MARGA: I couldn’t say just one band or one kind of music. Some of my favourite bands are Black Sabbath, Hanoi Rocks, Lords of the New Church, Motley Crüe or Alice Cooper. Generally speaking, it's important to me the fact of how the songs are structured, have amazing riffs, pop voice melodies and theatrical staging if possible. 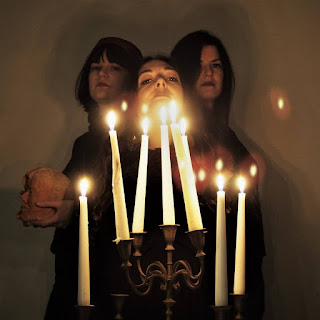 CARMEN: Everything around us can be an inspiration. My daugther is the main inspiration and motivation for me now, in everything i do.

MARGA: Personally, one of my main influences are horror films and literature, which are part of my life. At least once a year, I need to read Lovecraft and Poe clasical works. I also love dark art like Goya’s Black Paintings and religious art and arquitecture.

As a band, visiting cemeteries is one of our favourite hobbies. We always talk about how wonderful and inspiring it would be living in a house overlooking a cemetery.

We’re all a product of our environment. Tell us about the band’s hometown and how that reflects the music?

ALBA: We live in a small, quite traditional city. I would say that, if you're curious, this can make you want to explore further to see if there are more interesting things than what surrounds you. This can be done by reading or listening to music, travelling and meeting like-minded people. Also, the weather here is quite dark and gloomy in winter and we're surrounded by quite a lot of also dark and gloomy catholic churches and that is definitely reflected in our music.

CARMEN: We chose the name Kabbalah for being mysterious and strong.

MARGA: It would be amazing to write the soundtrack of any horror film, of course. But, if we only have one chance, “The Exorcist” soundtrack would be the right choice.

CARMEN: We had a great tour with Antimatter, sharing a motor home and acting for bizarre movies, but those will never be showed…

ALBA: For me it was a certain music festival in a certain Spanish island. We played our show and  ended up also playing an improvised show at a bar at 2 am. That same night all of our band's money got stolen, which we very unwisely kept in a purse and left it lying around. The next day we played another improvised show at the same bar to start recovering part of our now limited funds. We also reported to the police that our selfie stick had been stolen.

Tell us about playing live and live experience for you and for your fans?

MARGA: Well, we like to play live like we're just a unit. I mean, a strong union emerges between us on stage. Sometimes it's like everything around us were to disappear and we're in a parallel world. That's why we don't usually talk or actively interact with the audience when we're playing live. It's about the music and what our songs make people feel.

ALBA: The feeling it gives you.

CARMEN: My first song was for Las Culebras, and it would have been way darker if  Ihad brought it to Kabbalah.

MARGA: I can barely remember. I think it was a punk rock piece called “Tattoo you” that I co-wrote with a friend. And the first song I wrote all by myself was “Drink with you”, also a punk rock piece.

What was your first ever band, and what were they like?

CARMEN: My first band was a metal-hardcore one, with friends. I recorded my first álbum with them, a long time ago..

ALBA: In my case, it was, of course, a cover band at 15 years old. We always opened the shows with 'Rock you like a hurricane'.

MARGA: My first band was called “Las Culebras”. We played a mix between punk and hard rock. I still love the music we made and I am very proud of having been part of that. It was a very funny time of my life because all of us were quite young and crazy. Anyway, we worked on it very hard because we dreamt to become rockstars, and I had the opportunity to do tours, play in some important music festivals, meet tons of interesting people, play with some of my rock idols and learn a lot about music industry.

CARMEN: I couldn't name only one song

MARGA: It’s difficult to say… I mean, my songs are like if they were my children, I love them all equally. But if I have to say just one, I choose “Abomination”. It is a song that kabbalah wrote all together, even the lyrics, we all sing together at a time and it’s one of my Kabbalah’s favourite songs. It was like a challenge, because a label proposed us to collaborate in an álbum with some other bands, and ask us for a 3 minute song at most. We wrote that song in just one day between all of us and it lasts exactly 3 minutes!

ALBA: I think we all agree with OM. Then, I can name PYLAR, a Spanish band who are doing very interesting experimental music but very heavy as well, and based on ancient mythology and religion - they are really cool to watch live.

MARGA: I love Ghost because they have amazing pop songs and a very shocking staging. Another band that I like is Kadavar, because they have that 70’s clasical sound. And finally No Sanctuary because they are like an unclassifiable and misunderstood rara avis in the scene.

Whiskey or beer? And defend your choice?

CARMEN: None of them

MARGA: I like beer to meet with friends or enjoy a live concert. For deeper and philosophical conversations, better have whiskey, on the rocks if possible.

We, at the Ripple Effect, are constantly looking for new music. What’s your home town, and when we get there, what’s the best record store to lose ourselves in?

MARGA: Nowadays, just one record store is left in our town, and it’s called “Dientes Largos”, so you’d better get there!

CARMEN:Thank you for reading and for supporting the underground

Posted by The Ripple Effect at 1:24 PM