The Presidents Of The United States Of America – Love Everybody 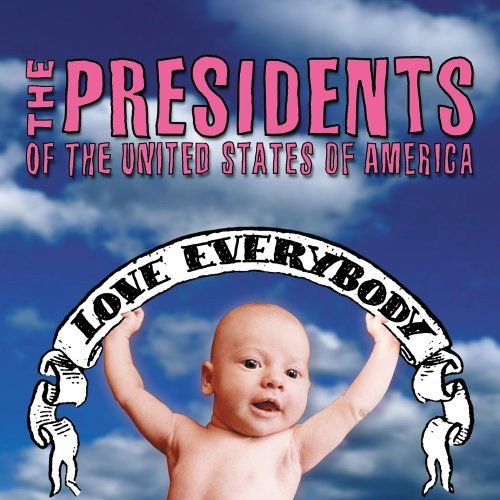 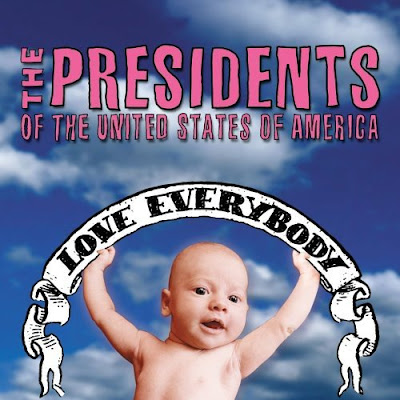 Greetings waveriders!  Pull up a chair because I have a little tale to tell.  Here we have a band that I have loved since 1995 when my parents bought me a copy of their self-titled debut album.  I listened to it over and over again, and when PUSA (yes I’m abbreviating their name) released their sophomore album a year later I purchased it as soon as I was able.  While that follow up is absolutely solid, it lacked a bit of the magic contained on the debut and my fandom began to waiver.  Unfortunately something else also contributed to my crumbling fandom…peer pressure.

Yes sports fans, I was young and at that time I was incredibly concerned not only with the opinions of my friends but also the opinions of the cool kids at my school as well.  You’ll never guess, but it turned out that it wasn’t cool to like PUSA.  I wanted to be cool too, so my love for the band was officially suspended.  Twelve years later I’m perusing the new music releases and unexpectedly discover an album by none other than PUSA.  At this point I’m long since over the need for other people to like the music I do, and I fondly recall my love of this band so I bought the CD.  After one listen my fandom was reignited and I’ve been listening to their music regularly ever since.

That brings me to today’s topic, Love Everybody.  This album was released in 2004, years before my fandom would be unsuspended.  I bought my copy a few months ago in late 2020.  Why did it take me so long to purchase this record you might ask?  Well, my best guess is that subconsciously I was embarrassed about caving to the peer pressure and my brain was punishing me for lacking the intestinal fortitude to forge my own path.  Regardless, boy oh boy was I missing out! 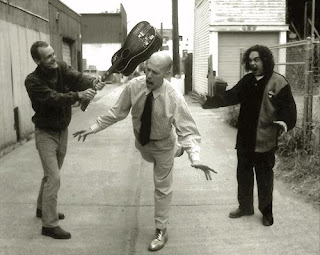 Love Everybody is phenomenal!  That aforementioned magic which graced their self-titled debut, well it’s all over Love Everybody.  This album has all the qualities that made me a fan of PUSA.  Simple and powerful guitar/bass lines coupled with superbly complimentary drumming?  Check.  The fun, uplifting vocals of Chris Ballew?  Affirmative.  Memorable songs that don’t overstay their welcome?  Yep.  Truckloads of goofiness and good cheer?  Oh heck yeah!

Folks, listening to Love Everybody is a great time.  The title track kicks off the proceedings and just locks the listener in immediately with its gleeful groove.  “Some Postman” grabs the musical baton and shifts focus to a slower paced, more anthemic pop rock template.  Two songs later “Highway Forever” presents a somewhat sinister backdrop to a galloping blues number.  “Poke And Destroy” is one of my favorite tracks on the album thanks to its infectious hooks and chuckle inducing subject matter.  The same can be said for “Drool At You”.  Then there’s “Munky River”, which is truly sublime.  Basically what I’m attempting to communicate in more words than is absolutely necessary is that this is one collection of songs that doesn’t let you down.  Not even a little bit.

Friends, waveriders, music lovers!  I want to help you forget about your worries and your troubles.  Love Everybody from The Presidents Of The United States Of America is the perfect vehicle to put a smile on your face for forty straight minutes!  It’s fun!  It’s goofy!  It’s fantastic!  Listen today!

Email ThisBlogThis!Share to TwitterShare to FacebookShare to Pinterest
Labels: chris ballew, drool at you, highway forever, love everybody, monkey river, poke and destroy, some postman, The Presidents Of The United States Of America