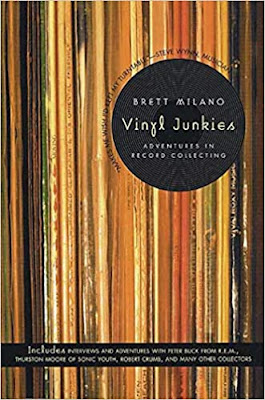 As a devoted, life-long vinyl collector, I always enjoy books like this - delving into the minds, obsessions, and collections of various collectors.  And Milano does a good job of finding some of the world's most devoted vinyl junkies and daring to enter their grey matter to see what makes them tick.  In the process, he creates a fascinating psychological profile of the obsessed record collector, or collector of anything for that matter.

Along the way, he brings forth several famous names and digs into their vinyl collections, their wants and their whys.  Names like Thurston Moore, Peter Buck, Robert Crumb, Peter Wolf, and Monoman of the band The Lyres, amongst many others, dot the pages and lay bare their obsessions.  It was truly a fun and quick read, and in the process, I was able to learn a lot about some obscure albums and singles that I was unaware of.  I also learned why I love the process of collecting so much, and also why I have such a distaste for so many in the collectors world.

We'll start with the former, then move to the latter.

I've analyzed my collecting obsession quite carefully, and it didn't really take a degree in Behavioral Biology (which I have) to suss myself out.  Coming from a very unsettled childhood where the only consistency was it's inconsistency, I know I longed for a safe place.  I found very early on that I could lock myself in my room, and with the music playing loud enough all the warring outside noise could be drowned out, and I'd be alone, at peace.  The music was more than therapy, it became my way of safeguarding myself, of expressing myself, of feeling love, of measuring my loneliness, buffering my isolation, of daydreaming about a different world than the one I inhabited.   Air guitar concerts became my nightly relief from the turmoil that was going on in the room next door or down the hall.  In my room, surrounded by my records, I was safe.  And the more records I had, the safer I became.  I had the total ability to control my environment simply by changing the record.  The mood, the tone, the emotion . . . . it was all within my control.  It was my safety net.

I soon learned the absolute freedom of turning off my mind and my emotions, and losing myself into the stacks and stacks of record store shelves.  Some had drugs, I had records.  Walking into a new record store, I'd be filled with excitement as to what "finds" awaited me.  I'd easily spend 4-6 hours in a store, digging through every bin, every crate, every inch of understock, finally leaving with my treasures tucked under my arm.  And even when I had enough money to buy whatever I wanted, the joy of the hunt wasn't to find it and buy it, but to unearth it in a discount bin.   A beat up but playable $1 copy discovered randomly always meant more to me than a pristine $10 copy that I just went to the bin and pulled out.  It was a treasure hunt and a safe preserve all in one activity.  Still is to this day.

And it took my mind away from the reality of my life.

I think all collectors have some component of that in themselves.  Collecting is an obsession because it's a diversion and an enhancement.  It's a protection and a passion.  At one point or another, all collectors get disgusted by all that they've accumulated, but at the same time simply looking at that wall of vinyl can bring joy.   It's a paradox.  And it's one we all share to some degree.  To that effect, we're all alike, male/female, color, religion, gender or sexual orientation.  None of that matters.  It's all about the music and the collection.  Shared love of a band or an album breaks down all barriers.  It's really a beautiful thing.

Whether talking minutia about what every ex-member of Deep Purple did in subsequent bands, or which producer worked on what release, or which label put out the best reggae singles, it's a language record collectors all can share, and relate to, and connect.  Collecting connects people in ways nothing else can.

Milan's book touched upon this passion, and brought it forward.

But Milano also brought out the one thing I hate, and he seems to embody it the most, more than any of the collectors he interviewed.  To me, collecting records is a very individual passion.  People find value in what emotionally resonates with them.  No one should ever have to explain the music they love, or why they love it, or why they've hunted down every known Australian-only 45 single by Olivia Newton John  (an artist any critic will tell you is totally uncool to love).  But if it's what someone loves, then that's all it takes to be cool. Love it whole heartedly, without judgement. There is no such thing as guilty pleasures, only pleasures.  Milano seems to disagree.

It's clear that Milano is a typical music snob, who feels his taste, or only the taste of the critics is of value. You like The Spice Girls, but not Bob Dylan?  What the hell is wrong with you?  You have the Live Killers Queen album in your collection?  You should be embarrassed, or at the very least don't ever invite Milano over to your house because he'd be embarrassed for you.  Milano is of the mindset that only those who are "professional" collectors, who hoard obscure 60's garage rock, blues and soul singles, and can recite from memory every bit of writing on the runout of every Chess album, are of value.  Everyone else is wrong.   If you like Heart's "Bad Animals" rather than rare blues 78's you simply are wrong.  If you can't see the brilliance in the most obscure self-released rockabilly single then you really aren't worthy of his time.

Sorry, that's bullshit.  I certainly dig the obscure psych album, and would love a stack of rare 60's garage singles, but you know what, The Spice Girls had some damn fine pop songs.  Dylan is ok in my book (respect) but I find him boring, I'd much rather hear Simon and Garfunkel or Cat Stevens.  In fact (gasp, gasp) I like Paul Simon's lyrics even better than Dylan's.  So shoot me.

While my collection is actually very rich, and full of wonderful surprises like rare acetates, test presses and first run punk singles, there are also many albums in my collection that would make Milano crap in his pants.  Right next to a rare Led Zeppelin bootleg, I may have The Levelers album, which I'll even admit isn't all that great.  I dig the Spinners, and Ohio Players but haven't really heard all the soul singles from the Cotillion Label.  I've long gone on record saying that The Knack's "My Sharonna" is one of the world's most perfectly crafted pop songs.  From the hook, to the lyric, to the chorus, to the insanely catchy drum beat.  It is pop perfection.  Who cares if it sold umpteen million copies.  I like it.  I own it.  Probably more than one copy of it.  I know I have at least a couple copies of the Knack's debut album (sheer brilliance) and I'm even one of those weird dudes who has all their other albums (not really so brilliant).  But it's my collection, and last I checked, I'm free to like what I like, and collect what I collect without Milano judging me up and down because I've yet to get a copy of The West Coast Pop Art Experimental Band or an original single from The Lollipop Shoppe.  (Not that I'd mind having either one, mind you.).

My point here is that Milano does a great job of unveiling the mind of the collector in all it's beauty and it's despair, while simultaneously unwittingly revealing the snobbery and judgmental attitudes of the critics who always feel entitled to bash people for not collecting the way they think you should. And aren't afraid to say so.

My response?  Collect what you collect. Love what you love.  No explanations are necessary, no defense is needed.  After all, if you're at all like me, the entire love of the collection stemmed from an inner need to find a safe place and a way of expression, so the last thing we should ever do is judge somebody for that.  If collecting is your way of expressing yourself, then shout it out to the skies.  In my mind, it's all good.

So, thanks to Milano for the book.  It truly was a great read, and as you can tell, it inspired thought and debate within me.  Hopefully, it can now spark a conversation amongst us all.