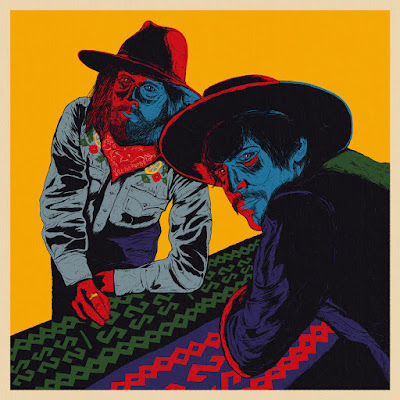 This week I’m back bringing a bunch of stuff that I became entrenched with while on a couple couch sessions with my ear buds in diving down the bandcamp mobile app search filter. My go to filters are “vinyl” as the media type, then I start with “Country” or “Punk” or “Rock” and the subfilters go on and on. It’s really a cool way to sift up some stuff that might not be on the bandcamp feed and could possibly unearth some great albums. The possibilities are endless and these are all mostly albums I found that route in the recent week and ended up adding to my collection in one form or another.

What an exquisite voice not to mention the wide array of musical stylings on display. Ranging from folk inspired Americana, soul-infused honky-tonk, raucous country western and cosmic-tinged blues, Come on In should appeal to fans of The White Buffalo, Chris Stapleton and Black Country Communion.

Colemine Records has been one of my go-to labels for all things soul over the past couple years, so when anything released on that label pops up I’m instantly intrigued. What we have here Introducing…by Aaron Turner is a magnificent soulful rock album. Combining blues rock, funk, soul and jazz with a high frequency croon that makes Justin Timberlake sound like an actual dude, Aaron Turner’s debut album introduces us to what is likely one of the strongest debut albums to hit the streets in 2021.

The High Heaven – Fairytales of the Heartland

Absolutely riveting spaghetti western from down under. The cosmic surf meets honky-tonk with a- outlaw punk attitude will surely stand the hairs up on you neck. Love it.

Straight up rocker. Crisp clean vocals, polished fuzz, and driving rhythm throughout. As accessible as it gets in the heavy underground while remaining true to the grit.

The Whiskey Charmers – The Valley

This album was one of the longest running titles in my Wishlist and I just never got around to actually buying it. While on a deep dig in the bandcamp filter world, The Whiskey Charmers were sitting there with vinyl glistening with adistilled twang and desperado flair. Carrie Shepard (Lead Vocals) has a commanding tone while she weeps through these hard-edged country swooners. The follow up is just as good and is offered on CD and Tape.

After going somewhat under the radar on their debut album Bad Boys of Comedy back in August 2020, Lammping are back with a new EP and an even more psychedelic than the last album. Coming at us from Toronto, Lammping bring a trippy garage psych, with grooving bass lines, off kilter tempo, and intriguing songwriting. Like the Beatles during their LSD years, this shit will put you down in a happy trance. Oh and I just finally purchased their debut on blue vinyl while I was writing this blurb which was also released by Nasoni Records.

This will be the next album I purchase when the bleeding seeping from my wallet clots enough to survive. I’ve been totally obsessed with these post-punk rockers from Melbourne since they popped up on my punk filtered Bandcamp vinyl dig. She sings withpassion and their songs are loaded with angst, fervor and love. The rhythm hits with raw power, slappy bass, and serrated tone while the vocals hypnotize with piercing grit.