“A sonic wail of a tale about the youthful beginnings of one of the Mount Rushmore ‘heads’ of rock ‘n’ roll journalism. I loved it.” —Joel Gion of The Brian Jonestown Massacre

“Loudmouth is, as advertised, a loud and brash trip that takes you through the hellish halls of childhood and adolescence before delivering you to the sweet salvation of rock ‘n’ roll music and all that rides alongside it. The story is majorly compelling—funny, tender, and very, very honest. Read this book immediately if you like truth, drugs, generation gaps, guitars, and lifelong quests for freedom and kicks.” —Craig Finn of The Hold Steady

“In prose that’s beautiful, when it’s not hilarious, this noisy, nostalgic novel tells how an excitable boy from a darkly conservative family survived childhood and then rock ’n’ roll. It’s a wild ride with some amazing characters — including a few you might recognize — and I’m in awe.” — Jaan Uhelszki, former Creem editor; writer, producer of Creem: America's Only Rock 'n' Roll Magazine

“This picaresque, coming-of-age novel, about a boy who looks for answers in rock ‘n’ roll, but finds them in the love of an extraordinary woman, is sad, serious, funny and, in the end, ridiculously moving.” — Sylvie Simmons, New York Times bestselling author of Face It: Debbie Harry a nd I’m Your Man: The Life of Leonard Cohen 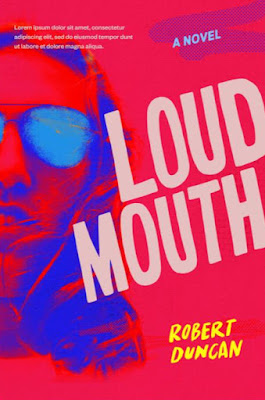 SAN FRANCISCO, CA (July 29, 2020) — A lifelong rock & roll obsessive, Robert Duncan was barely out of his teens when he gave up singing in bands and started as a writer for the influential, icon-smashing music magazine Creem, becoming its managing editor at the ripe old age of 22. He went on to contribute to Rolling Stone, Circus, Life, and dozens of other publications. In the process, Duncan became a rock Zelig: he shared tall tales and fried shrimp with a young, scrawny Bruce Springsteen, while driving him around Cleveland; he introduced the Clash’s Mick Jones and Joe Strummer to a broken-down piano player of dubious ability, leading to a hilariously disastrous recording session with the band; he worked alongside his friend Lester Bangs and witnessed his tragic spiral, before discovering the legendary critic dead, at 33, of an OD in the apartment next door. These experiences, and many others, provide the fuel for Robert Duncan’s debut novel, LOUDMOUTH, a rip-snortin’ coming-of-age story that will be published by Three Rooms Press on October 6, 2020.

The novel is the story of Thomas Ransom, born to a severely dysfunctional southern family transplanted to New York City. Left to his own devices by neglectful parents, he spends much of his childhood shadowing his older, criminally-inclined half-brother and roaming New York with hard-drinking teenage pals. Tom eventually finds an outlet as the flamboyant singer of a downtown rock band, and later as the young editor of the Detroit-based magazine that invented punk—only to return to New York, at the height of the 1970s bacchanal, and crash. But it isn’t music that saves him. It’s a soft-spoken painter, who turns out to be the most outrageous character of all.

With echoes of Almost Famous and Just Kids, LOUDMOUTH tracks an impassioned musician and writer out among the punks, hippies, and wild geniuses of rock when music was the center of the world.

I encourage you to check out LOUDMOUTH. Please feel free to contact me if you would like to speak with Robert Duncan, have questions, or need more information. Thank you for your consideration.


LOUDMOUTH: A Novel
by Robert Duncan


About Robert Duncan:
ROBERT DUNCAN is author of The Noise: Notes from a Rock ‘nʼ Roll Era, Only the Good Die Young: The Rock ’n’ Roll Book of the Dead, and Kiss, a satirical biography of the band. He was story consultant, as well as interview subject and voiceover, for the documentary, “Creem: America’s Only Rock & Roll Magazine,” which premiered last year at SXSW and will be streaming on Netflix and other major platforms in July. He has worked as a singer, songwriter, and record producer, and is founder of the three-decade-old ad and design agency Duncan Channon and its Tip Records subsidiary. He was born to a transplanted southern family in Sheboygan, Wisconsin, but grew up mostly in New York. He currently lives with his wife, the artist and rock photographer Roni Hoffman, in Fairfax, California.