A Sunday Conversation With. . .Ugly Clinic guitarist Pete the Riff 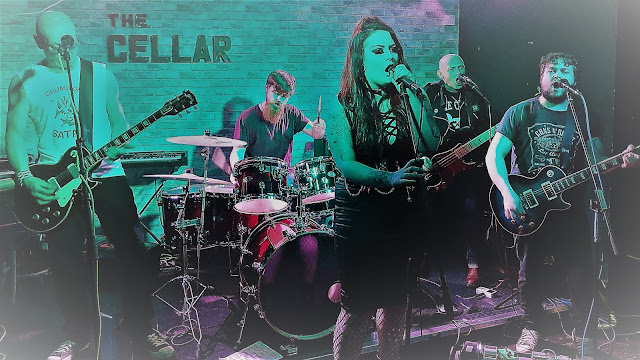 When I was a kid, growing up in a house with Cat Stevens, Neil Diamond, and Simon and Garfunkel, the first time I ever heard Kiss's "Detroit Rock City," it was a moment of musical epiphany. It was just so vicious, aggressive and mean. It changed the way I listened to music. I've had a few minor epiphany's since then, when you come across a band that just brings something new and revolutionary to your ears. What have been your musical epiphany moments?

Well, as we are a multi-generational band, that answer will vary depending on who you ask. But for me, at around age 15, it was listening to two albums that a friend of mine’s older brother had in his collection. The Ramones ‘’It’s Alive’’ and The Damned ‘’Machine Gun Etiquette’’. One live album, one studio. Both brilliant in their own way. We played them to death, and formed our own band soon after.

My name should give that one away – I’m Pete the Riff, so the riff always comes first! But Davie (Bass), Richard (Guitar) and Chloe (vocals) all write differently.  Most of our songs start off with one of us coming up with the core of the idea then they will bring it to the rest of the band for development. If it’s a good song and everyone likes it, it moves forward, and if f it’s not so great, it tends to get put at the back of the queue! We don’t generate material by continual jamming or studio experimentation, we’re not that sort of band.

As a group we tend to like bands from the punk/metal/goth genres  - bands like The Damned, The Jam, Motorhead, AC/DC, Blondie, Pink, to name but a few.

Where do you look for continuing inspiration? New ideas, new motivation? Our first rule is never copy. If you want to copy other people, join a covers band. We don’t copy anybody, or any specific era or genre. But as a group of individuals, our personal tastes tend towards the Punk/Metal/Classic Rock/Goth side of music. That’s where our influences mostly come from. With some weird left-field stuff thrown in sometimes for good measure! But anything or anyone can inspire a song, from life’s day-to-day challenges to personal stories about past indiscretions!

We come from Aberdeenshire in the North of Scotland, which is quite a remote area, far away from London. There’s only a small number of like-minded musicians with the necessary talent, energy and ambition available to work with – and a lot of them are already in other bands. Aberdeen is a college town with two universities, so there are a lot of young, creative types around. It’s a lovely place in the summer, but it’s cold and gloomy in the winter. I think because we are so far away from everywhere else, we aren’t so influenced by whatever the music industry decides to push as the latest trend, and people tend to pick their own style and stick with it. In a lot of respects, it’s a bit like Seattle, but with less people!


Where'd the band name come from?

The name comes from a Judge Dredd story in 2000AD comic. It’s the opposite of a beauty parlour, people go there to deliberately get ugly! As we generally despise all forms of bland, manufactured pretty-boy pop music, the name resonated with us.

The next Bond film. I already know how to play the James Bond theme on the guitar!

Plan 9 Channel 7 by The Damned. There’s so much fascinating back-story to it. But I’m not doing 1000 words  on it here!

As a band, we’ve only been going for a few months, so we haven’t got any great stories from the road yet. But many moons ago I used to work on the stage crew at a theatre in Aberdeen. On one occasion Meat Loaf was playing there, and during ‘’Bat out of Hell’’ I had to crawl across the stage on my stomach behind the drum riser, towing a 10-foot high polystyrene gravestone behind me! It’s not quite Stonehenge and dwarves, but everyone else on the crew called me ‘’Gravedigger’’ for a while after that.

For anyone who performs in public, it should be all about the fans, not you as an individual. Okay, playing live is a rush and it’s great for the ego when people like you – but you have to give the audience a good show, and that means being well-rehearsed and professional. It doesn’t matter if you only play two chords the whole night – play them well! We’re just starting out as a band, but we’ll sure take care to remember who it was who were with us right from the start.

Anything – and nothing. Nobody knows. If it was easy to do everyone would do it. I’ve came up with a few ideas that I thought were pretty good and then nobody else liked them. And then the exact opposite can happen – you do a little riff or a lyrical phrase that you think is fairly disposable, and people like it.

That is so far back I can’t really remember. It certainly wasn’t ever recorded or played in public. As I was a teenager at the time, it probably involved either ranting against some perceived injustice, or maybe it was just about being dumped.

The into riff on ‘’Pink Speed and Tequila’’. It’s so simple and dumb that when I wrote it I thought that surely it must have been done before by someone else. That’s normally a sign that you’re on to something good.

Some veteran bands like Pearl Jam and Metallica still surprise me occasionally by continuing to issue good, strong material. But I also like lots of new stuff like Royal Republic, The Chats and The Regrettes.

Vinyl without a doubt. Best sound reproduction and best format for artwork too. I love the smell of fresh vinyl in the morning!

Whiskey or beer? And defend your choice:

Why does it have to be one or the other? Here in Scotland. We don’t pussy-foot around – just have both. We have a thing called a  ‘’shot and a half’’. It’s a shot of whisky with a half-pint of beer to go with it. Oh, and the correct spelling is ‘’Whisky’’. Once you’ve had a good Speyside Single Malt, you’ll never go back to that Tennessee rubbish!

If you ever find yourself in Aberdeen, the best record shops are Aberdeen Vinyl Records in the old indoor market, Spin Records on Littlejohn Street and Maidinvinyl Records on Rosemount Viaduct. Best pubs are Krakatoa, The Prince of Wales, and Ma Camerons.

We’ve already started making demos for Album number 2, and hopefully a whole lot of gigs once we are allowed to venture outside again.