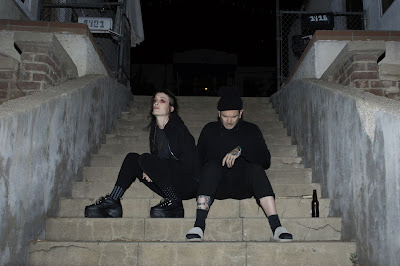 Boy Deluxe is back with a new video/single and a new band name (previously Ever So Android) . The LA Noise Pop duo is putting out "So Slow" video on July 31st.

"So Slow" was written early 2019 in our apartment on Sunset while we were still Ever So Android. I think True had actually written the music to this song and we sat on it for a while, unsure how to finish it. There was a big difference between this track and what we had traditionally written in ESA and to be honest, it paved the way for what became Boy Deluxe. We called up a couple of our friends to give us feedback on what we had and ended up digging in really deep into the vocals. Changed the delivery completely, added a thousand harmonies and all the sudden we felt like we had something real. Once it was written, we sent it over to True’s long time friend and ex bandmate Gabe Pressman in New York to mix it and then sat on the song a little longer. Finally figured out we wanted John Geenham (Death Grips, Billie Eilish, Ice Cube) to master it and finished the song in the end of February 2020. With the final product done, we decided to release it under the new project and give the song our full attention.


PAST PRESS "[Boy Deluxe]’s mixture of the distorted programming of Pretty Hate Machine-era Nine Inch Nails and the glitchier strands of the current EDM movement forms a tempestuous brand of electro-rock that’s as dangerous as it is alluring." - KEXP Song of the Day podcast

"It's very hard to find something out there quite as striking or instantly individual as Seattle electro-rock duo [Boy Deluxe]." - Drunken Werewolf

Boy Deluxe. Noise pop. Alternative. Weird haircuts. Black clothes.
Hope S, a pastor’s daughter, raised in the shadow of dogma and divorce, and True Murra, a Philadelphia-born multi-instrumentalist and former heroin addict, started their first project, Ever So Android in Seattle. “What started out as curiosity and a surprising friendship lead to an intense connection,” said Murra. “Slowly we became obsessed with writing music together. The only intimacy was found in creating, and so we poured ourselves into music.”

After five years of sell out shows at venues like The Crocodile and The Tractor Tavern, with regular airplay on KEXP, Hope and True turned their focus to Los Angeles, where they relocated in 2017. After years of experimentation and writing songs on the side of ESA, the pair decided to change their name, finally admitting they had grown into something else. Rechristened Boy Deluxe in 2020, the pair set about recording a new crop of songs that fully captured their creative evolution, including recent singles, “Bait”, “Beginning of the End”, and “Creeps”.

Most importantly, the name change signified a change in approach. “Ever So Android was what we thought we should be,” Hope S said. “Boy Deluxe is exactly who we are. Trying to ‘do the right things’ led to confusion and a loss of identity. The turning point came when we accepted that writing fulfilling music came alongside self-understanding. The more we learned about ourselves and quit caring what everybody thought, the more we loved our art.”

Hope S and True Murra as Boy Deluxe have harnessed a clear voice of their own. Hope’s unique vocals are adorned by Murra’s moody electronic machinations, creating tension and emotional release. Living in Los Angeles, with a steadily increasing audience, Boy Deluxe have found themselves in their sound.