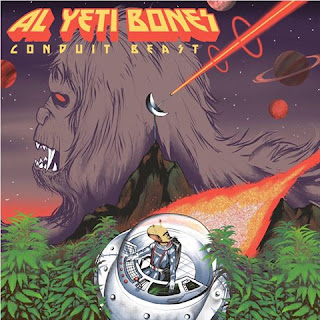 Got a cool message from AL Yeti Bones​ of Gypsy Chief Goliath, (G.C.G.)​, and formerly The Mighty Nimbus.

Recently during this isolation, he wrote and recorded an album he's going to be releasing shortly. The Al Yeti Bones project is called "Conduit Beast" and the song is called Afterlife.

While he was preparing riffs and compiling ideas for a new Gypsy Chief Goliath album, the craziness happened and just ended any path to recording the band had been planning. As the isolation began and changes were happening daily,  everyone in the band had to deal and recalibrate their lives.

For Al, keeping sane was of the utmost importance so he began demoing songs at home. Before he knew it, he'd written and pieced together about 30 songs, and picked out  8 to use as a side project.   Hence, the birth of Conduit Beast.

Posted by The Ripple Effect at 1:56 AM