A Ripple Conversation With Diego And Pedro From Moura 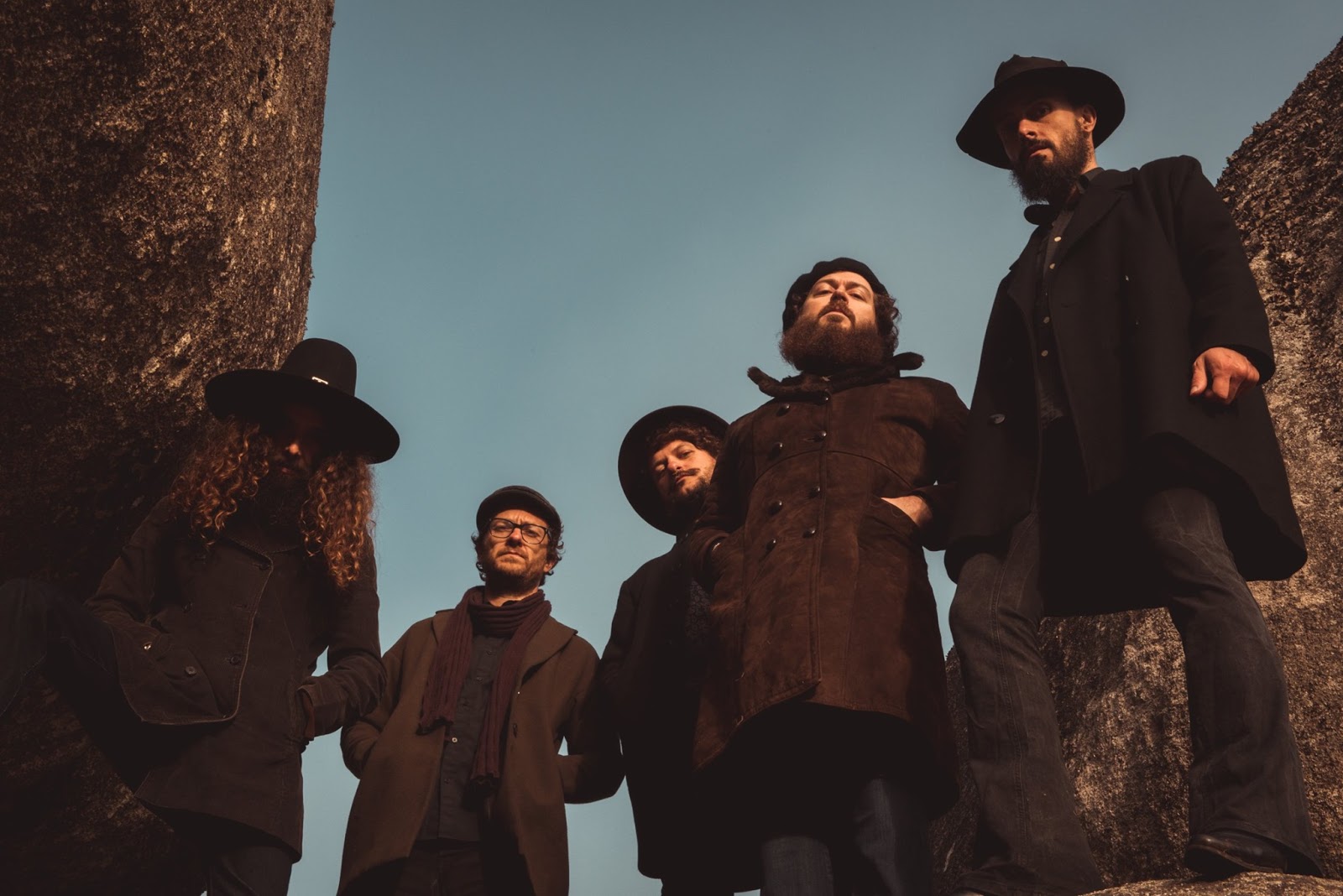 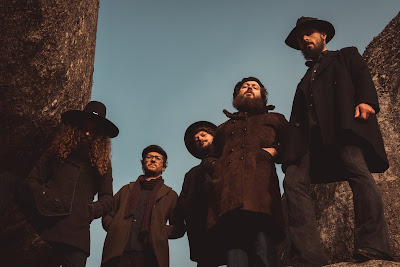 Diego: Mine was the long trips to the countryside with my parents when I was a child listening to those cassettes recorded by my Dad and also his eclectic collection of vinyls where you can find Beatles, Stones, Pink Floyd, Hendrix, Triana, Fuxan Os Ventos, Space, ELO, Led Zeppelin, etc. That music really helped me to grow up, love music and want to learn how to play guitar.

Pedro: There were a few. The animated film inspired by the music of The Beatles (Yellow Submarine) when I was a kid, my parents' records of Hendrix, Santana, Crimson, etc. Then I discover The Who by myself and those amazing bass lines by John Entwistle led me to that particular instrument, and the last but not least, when I listened to Kyuss' "Welcome To The Sky Valley" for the very first time. Anyway, I am open to new musical epiphany moments every single day.

Diego: Mostly our song-writing process is based on jamming on a riff or someone's ideas and start developing a sort of common trip until we find an structure or the song itself flows in a way we all feel it. On this album we worked hard during a couple of years playing 'em live and improvisation played a major role until we reached the final version of each song.

Diego: In my case, my first approach to music was through my Dad's cassettes and vinyls so although I'm very open-minded and eclectic, I'm a huge Beatles fan, Pink Floyd, King Crimson, Nick Drake, Pentangle, Black Sabbath and all the amazing music that was made during the 60's and 70's all around the world are my basis.

Diego: Moura have a deep connection to our Galician roots so I look into Galician folklore, traditional music, ethnografic books, Galician mythology, etc and try to melt it with my "rock background" to melt both worlds. That's a great motivation for me, the continuous search of ideas in a different musical language and mix it with more classic sounds with taste and respect.

Diego: Coruña is a beautiful small town surrounded by sea in the corner of the end of the world. Rainy as our green land Galicia, has been an important port since the beginning of history having the oldest lighthouse in the whole world that still works as it (Tower of Hercules). I was raised between the shores of Atlantic Ocean and the countryside of centre-Galicia where my both parents come from so my contact with the core of our land like the rural legends and folktales, the old traditions, the Nature, the sea, etc has been very important for the developing this mixture we try to make with Moura.

Pedro: Well, it's actually the key of this project, we claim the druidic legacy of the Galician culture which drinks directly from the pagan tradition of the Celts.

Diego: A moura is a supernatural being from Galician folklore whose origins are thought to be Indo-European Celtic. Mouras are female divinities of the water, sort of nymphs or spirits of nature, powerful and seductive, who live under an occult spell and guard caves, wells, bridges, rivers and treasures.

Diego: Probably an experimental approach between The Wicker Man (Robin Hardy, 1973) and Hour Of The Wolf (Ingmar Bergman, 1968). 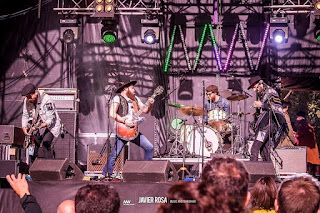 Pedro: Something between 2001: A Space Odyssey and Cosmos (Science documentary) with Mr. Carl Sagan or Neil deGrasse Tyson.

Diego: It's hard just to pick one but definitely "Echoes" by Pink Floyd and "Starless" by King Crimson will be main candidates. Overwhelming pieces of music with beautiful passages, violent and chaotic segments and haunting melodies.

Pedro: That's a tough question and I guess if you ask me again tomorrow I'll probably choose two different songs, but right now I'd say "Dead Roots Stirring" by Elder and "El Memorioso" by Psicomagia.

Diego: My recollection of memories is not very clear but forgetting van's keys inside and driving 2h to another town to get the copies after a gig in which we couldn't use the Hammond organ due to technical problems was a cherry on top of a surrealistic day.

Diego: Our music has a strong component of communion between ourselves first and with the audience after we get the right vibe. It's an amazing experience when all facts work in the right way to reach this collective trance. Best high ever.

Pedro: It's the best part of all of this when you feel like a shaman and lead the audience into a kind of ancient ritual.

Diego: The capability of moving, reaching you to the guts and turn you on in different moods.

Diego: Probably a one chord song...hahaha...I think it was a 3 minute three-chord sixties-like riff song in English that ended up being in the first demo of my first band. Probably influenced a bit by The Who on my early days.

Pedro: Something with Hellacopters vibes, you know power rock'n'roll, but of course shittier...

Diego: "Eira" was the first composition I truly believed our mixture of Galician tradition and psychedlic prog-rock could work perfectly and though I'm very proud of the final result of the whole album, I think that one is my favourite.

Pedro: I love all of them but when we play "O Curioso caso de Mademoiselle X" live, often leads me to a state of trance. 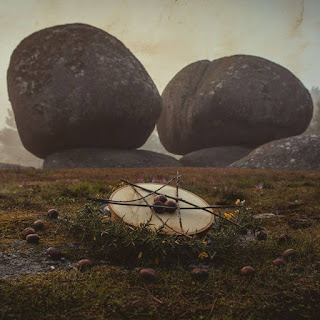 Pedro: Agree with all of them, I'd add maybe Elder and Colour Haze...

Diego: Vinyl for the ritual, digital for convenience.

Whiskey or beer?  And defend your choice.

Diego: Do I have to choose? Both play well together and add some Galician coffee liquor to the combo.

Pedro: Sorry to disappoint you guys, but I don't like whiskey... I am more into rhum, I love beer too and of course our beloved magic potion (coffee liquor).

Diego: Sadly in Coruña, due to shopping malls and Internet, the best record shops had to close but will always remember the importance of the already disappeared Portobello store in my musical education. Bad times for vinyl romantics here.

Diego: After releasing the album we had a presentation tour booked and some festivals already confirmed that had to be postponed due to the Coronavirus crisis. Our plans also include the filming of a video for one of the songs of the album and the recording a new song we were working on. We'll keep promoting the album they way we can meanwhile we're not able to join together in person and back on the road as soon as we can.

Diego: Resist hard, obey little. Free your mind and your brain will follow.

Pedro: Stay safe and turn off your TV. Peace and love brothers and sisters!
Posted by The Ripple Effect at 12:30 AM

Email ThisBlogThis!Share to TwitterShare to FacebookShare to Pinterest
Labels: 2001: a space odyssey, a ripple conversation, Black Sabbath, elder, elo, King Crimson, led zeppelin, moura, The Beatles, the hellacopters, the who