A Sunday Conversation With Drug Hunt 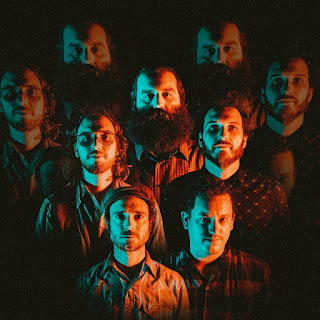 As a kid growing up in a house with Cat Stevens, Neil Diamond, and Simon and Garfunkel, the first time I ever heard Kiss's "Detroit Rock City," it was a moment of musical epiphany. It was just so vicious, aggressive and mean. It changed the way I listened to music. I've had a few minor epiphany's since then, always when coming across a band that just brings something new and revolutionary to my ears.

The first time I heard "Five to One" by The Doors is for sure one of those moments. I didn't really have an appreciation for the 60s, Stones or The Beatles at that time, but when I heard that song it resonated with me. It was this shadowy tribal piece of psychedelia that was visceral, powerful, and moody. Then I find out Jim Morrison was high and getting fellatio while he recorded his vocals and well that's just too much mystique for a 12-year-old mind. There's many others that come to mind, like hearing Sabbath’s "War Pigs," The 13th Floor Elevators’ "Slip Inside this House," or The Tremulant EP by The Mars Volta for the first time. Live epiphanies were also very important; I remember when my brother would take me to punk shows, the juxtaposition of such wildness and cohesiveness in that scene was a formidable religious ecperiencd. The crowd surfing and moshing, getting knocked down and then picked back up by the same guy, and all the community outreach the principals did was inspiring. I still love those records from Crass, Subhumans, Rudimentary Peni, and The Skulls. Penis Envy plays on repeat in my car since I broke my tape deck.

Each song is entirely different, and the process has changed over the last few years. I initially did most of the writing, but as we got to know each other and developed a sound – and a trust in that sound – it’s become more "collaborative" …or as we call it "An Egalitarian Anarchy.” Each member has an equal say and can bring ideas or full fleshed out parts, then the rest of us go about arranging and mixing in our own personality. If the song ultimately doesn't fit our collective interest, usually it will dissipate as each members enthusiasm bows out. Other songs come from jamming; we usually get our practices started with improv, so many times it just grows out of thin air. As for lyrics, that's mainly handled by myself and Jason Meyers (lead singer and guitarist).


Who has influenced you the most?

The band draws from so many influences it's hard to keep track. For me, Omar Rodriguez Lopez was one of my biggest influences in regard to playing guitar. His approach and philosophy towards guitar always made sense to me. I liked that he wasn't the flashy badass blues player or fast finger virtuoso, he tended to treat guitar as textures and a song like a movie. I dig that a lot – the way he drew inspiration from cinema, literature, and art. 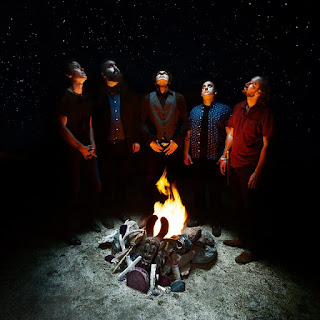 I think as you grow as an artist you try to expand your inspiration. I've always enjoyed the extremes. I like wild nights or pensive walks, watching mindless shit or some avantgard film. The trick is to keep your mind firing and stay away from the mundane; people who do the same thing day in and out tend to be boring. Self-examination and change are necessary to recieve inspiration. The motivation comes from finding fun in creating and hopefully being able to do so full time. I hate having to work a day job. I enjoy the chase presented by creating music and art – it’s the exhilaration of failure or success.

San Diego is an enigma. It’s a border town, it’s cross cultural, it has a lot of military influence, big universities, and it’s affluent and growing at a very rapid pace. San Diego is named “America’s Finest City” but is still very seedy, its natural world is gorgeous and has great diversity. You can drive an hour in any direction and be in a different country, beach, desert or mountain. We are a product of this diversity. I’m cognizant of them and champion the differences. Please don't move here though. My rents been raised four times this year.

I'd left for a trip through the Anza Borrego desert and told Jason that'd I’d try to come up with a name, because at that time we had a lot of pressure from the label to change our name and it was pushing back the release of the EP. What I came up with was "Medicine Hunt". He said if you're going to call it that we might as well call it “Drug Hunt”. To me it signifies something beyond the simple sex, drugs, and rock and roll connotation it usually takes on. Instead, I take “Drug” to mean something more expansive, because a drug is something that alters the mind. I think the hunt is a quest to find how to alter minds with music, and how to create a show that can inspire an altered state. After many arguments from family, friends and the label itself, the name miraculously survived the onslaught and came out victorious.


You now write for a music publication (The Ripple Effect?). You're going to write a 1,000 word essay on one song. Which would it be and why?

Tough choice to make, I’d likely go with "Berketex Bribe" by Crass, since Penis Envy has been on repeat I feel I could rant at length about their virtuos untrained  musicality and incredibly formulated lyrics. Also I just took my brother to see Steve Ignorant play Crass songs and it was insane.

The last time we played Las Vegas would have to be the most spinal tap worthy experience we've ever played. We had a meltdown. A fight broke out on stage, our bassist broke his foot, drumsticks were thrown, and the show ended a third of the way in. 30 minutes later while loading up the van, we reconciled differences, apologized, and were oddly surprised to have audience members wanting to buy merch. They asked, “Was that an act?"  "Do you do that every night?” and applauded such an absurdity with “…that was bad ass”. We ended up procuring our bassist an electric wheel chair, and participating in all kinds of sin city shenanigans. It was bonding at its highest peak and lowest low. A pact was made that night: “This will never happen again… but if it does —  don’t hold back!”

No holds bare, we prepare for these shows with a lot of practice and take great care to create an experience with projections, lights, art etc. However, as soon as we are on that stage it's a rock and roll show. We are there to incite a reaction and we do so by moving, hanging from rafters, screaming, handing off our guitars to random audience members, and trying provide a show worthy of leaving your house. 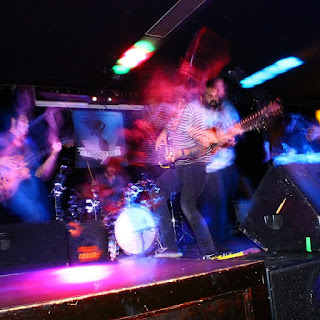 It was called "Acrobats" and had a dark folky start, weird psych jam in the middle, and ended with jazzy "Take Five" type outro. There was no chorus and might be the case that the only recording there is of me singing. It took me a long time to understand less is more, and I may still not entirely understand it yet.

This entire EP is still interesting to my ears, which is a good sign. I think what we made conceptually extends beyond the four songs. It’s cohesive, carries a whole lot of conviction, and articulates what we intended it to. I’m proud of it.

I've always been a fan of the John Dwyer of Thee Oh Sees – his DIY no bullshit attitude, his evolution and songwriting ethos, as well as his prolific output. He's inspired a whole herd of followers and musicians who remain loyal to him no matter what the new incarnation is. Dwyer is constantly touring, expanding his sound, and putting on energetic shows.

Vinyl is superior if you want to live with something. Headphones and vinyl are hard to beat; it makes you pay attention and fall in love. CDs are great if you want to make a mix to put in your car or get romantic with your girlfriend. Digital is one of the easiest ways to dig for things for these days – the worm hole of the algorhythm or the cool playlist people put together is king and undeniably hard to beat.

Whiskey! it works as a shot, it's refined with an ice cube and adulterated with coke or sour mix. Beer makes me sleepy, whiskey puts a pep in my step …although I'm mainly an agave man.

San Diego, all the homies work at Vinyl Junkies (shout out to Heather and Robb) they're not pretentious, champion the local scene, and are happy to answer questions. They're great people with phenomenal music taste, and collection, they’ll even DJ your events. Folk Arts is also cool if you're looking for some rarities and obscure sounds.

We haven't stopped working since the July 5th release, we've been writing non-stop and are going to be doing some pre-production in a remote cabin to get ready for the full-length record, which we will probably record in December. We'd like to work with Eric Bauer (Thee Oh Sees, Ty Segall) up in the San Francisco and find a label that might want to collaborate. We are currently free agents. Drug Hunt is releasing the EP digitally in late September, touring in November, and expect the full length out in time for spring and summer touring.

Thanks for reading, come to our shows, let us sleep in your living rooms. Thanks, Todd!
Posted by The Ripple Effect at 12:30 AM