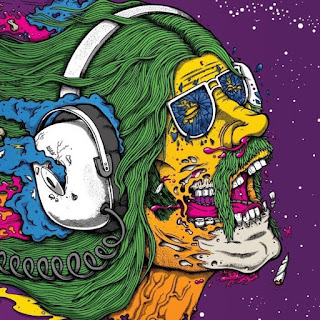 Ok, ok, ok, I got it. I should shut the hell up, I guess. I start going on like a friggin’ grouch about the whole stoner scene & here come my buddies Todd & Pope slamming me with another mutha further. I’m gonna be the first to say that I haven’t thought about ROADSAW in years. I guess that’s reasonable, considering that their previous album, an eponymous one (on Small Stone) came out way back in 2011. I think it’s also no small coincidence that their debut for Ripple, and 5th record overall, is clearly their best by far. Yep, Mr Severin & The Pope tend to bring out the best in people.

I put this thing in the car player and the opening strains of “Along For The Ride” seemed kinda mellow. Within a few seconds, though the 3-piece power force of ROADSAW grabbed me, ripped my head off and beat me with the bloody skull. Funny thing is, it’s not even a patch on the gnarling SAW-tooth riff of “Shake” or the Iommian brontosaurus stomp that plunders “Fat Rats.”

That enough for you? You already winded, honcho? Well, as my buddy’s old dad Valclav used to say, toughshitski. Here comes the runaway punk-metal freight train called “Final Phase,” the old # 2:17, barreling into the station and getting you ready for a massive aural beating. That punishment is administered by a lumbering riff gigantor called “Peel.” This is the kind of monstrous crusher that reminds me of the boiling hot summer days in my teenage bedroom, trying to learn the sacred ways of shamans named Farner, McCarty, Stephens & Winter. Seriously, friends, in this song, Ian Ross peels off what might be the most excruciating guitar solo of the year. Boy howdy!

And it continues. Two grinding riff behemoths that answer to the names of “Knock Em All Down” & “Under The Devil’s Thumb” sandwich the nearly pop-like melodies yet pummeling guitar action of “Find What You Need.” This is First Class Rawk Mail being delivered by the SAW, & they wind it up with the 6-minute lysergic prescription of “Midazolam.” Take as directed: in large quantities! But does that really end things? Naw, because we are mellowed down easy with the smoky acoustic beauty called “Silence.”

In all, this is another top-level blaster from the Halls Of Ripple. If you play “Tinnitus The Night” at full volume, chances are you might lose your hearing. But what a way to go.