WHITE BOY AND THE AVERAGE RAT BAND - “Love My Ride” 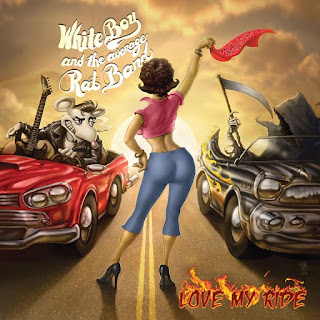 I used to collect rare records. Particularly, I collected rare metal & hard rock records. As hard as that is to believe, I really did, for a lot of years until I turned ‘round & sold them all. Now let’s not get crazy here. I didn’t sell them because I got out of music. Far from it. I was simply at a point where there was a cash flow issue and needed to turn some green. The funny thing I learned during the time I was immersed in this vinyl collecting was that some of the rare records that fetched big prices were simply just that: rare. They weren’t especially good, just scarce. In fact, some of ‘em were pretty fucking bad & had they been pressed in the 100’s of 1,000’s, nobody would’ve given a rabid rat’s ass. But some were good. And a percentage were great. And, friends & neighbors, a few rose to the status of being off the damn chart. A few examples are SORCERY (to paraphrase Pink Floyd, 2 different ones), SLAUTER XSTROYES and WHITE BOY AND THE AVERAGE RAT BAND. The latter produced an eponymous record in 1980 that has, for years remained one of my favorite of all time. This would be the case whether it was the mega-rarity it is (having sold in collectors circles for nearly $1000) or if it had come out on Columbia in a million-count release. It’s raw, haggard brand of stripped-down proto-metal rawk has held up like a champion for 39 years.

Well now, after that lengthy time, WB&TARB guitarist Mike Matney and crew have delivered a new album. What’s the skinny on that baby?

Well, the first good thing about “Love My Ride” is that it’s sure as hell not gonna be as hard to acquire as the debut. The second good thing is that the album smokes all kinds of bloody ass from stem to stern. Somehow, after all this time, Matney still gets his 6-string to sound like a nasty, distorted, corroded acid tractor with big fat tires and everything. I’ve always loved the dynamics of a trio and this is no exception. Bassist Darrell “Rambo” Gibson brings a big bad Stallone-sized gun to the fight, rumbling like a crucial machine through the proceedings while drummer (studio) Wayne Killius trucks on out and tells the news.

And what stories they have to tell! 12 full tracks and not a one of them wasted. They’re all reasonable length, nothing overstays it’s welcome. It’s all in the easily digestible 3-4 minute range. That is, if your idea of easily digestible is jagged rusted iron riffs. The thing is, they DO go down like a belt of smooth Tennessee fire water thanks to the underpinnings of catchy melody that Matney injects into every one. Listen to “Talking Me Down.” In an alternate universe where people who listen to the radio actually like to rock, this could be a major hit. Same with “Mirage.” Then you find the interesting and odd titles & lyrical aspects you expect in WHITE BOY after that ancient debut. Titles like “Shadow Child,” “S.O.A.R. (Son Of A Ram)” and “Homemade Satellite” ring with an obscure bizarreness that hint at BÖC on some really odd drugs. And then there’s the lead guitar work of Matney. You know Ray The Fucking Rocker is gonna key off the axe manipulations at some point and as much of a fan as I was of “Oriental Doctors” on the RAT BAND debut, here comes “Cold Springs Hill” on this one, busting at the seams with long, caustic streamers of vile feedback woven like a feral tapestry into solos that would make Billy Gibbons take pause. And come to think of it, that’s a pretty good comparison. Like the Rev Billy G, Mike Matney is a tone master supreme who can invest as many 6-string subtleties in a rock ditty as Carter’s got liver pills.

Need any more encouragement to see how much you’ll love this ride? Well, apparently WHITE BOY AND THE AVERAGE RAT BAND are gonna be doing a little touring & you’re gonna want to make sure you’ve got all the lyrics & air guitar moves down. Buy. Now. Rock.