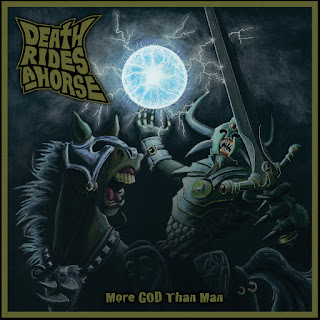 Special shoutout to Deadbangers Productions​.  Everything we love in an underground, independent record label.  Folks doing what they do purely out of love to uncover some of the best unheard metal in the bowels of the earth.  Like this gem from Death Rides a Horse​   Didn't know what to expect when I first put this baby onto the turntable, but I wasn't prepared for a massive sonic attack of perfectly executed thrash/power/doom metal.   Twin lead guitars sear through Ida H's evocative vocals.  Lyrical themes evolve from pan-Eurasian mythology, describing the fates of Babylonian gods and other magical figures. It's nice to see a band exploring other, less-mined mythos, and the band tackle the near eastern mythology with full intent and grandiosity. I've seen them described as having a "foundation of doom with supporting pillars of power metal" and I won't argue, but don't forget the backbone of thrash, with it's intensity and drive.

Dig into all that Deadbangers Productions has to offer in terms of their vinyl and cassette metal output.  I'm damn impressed by this little label, because I know how hard it is to fight the small label fight.  They also apparently do an occasional zine, but I haven't been blessed to see a copy of that.  But you know I'm gonna check it out.

Find out all about Deadbangers and give them a follow and your support.