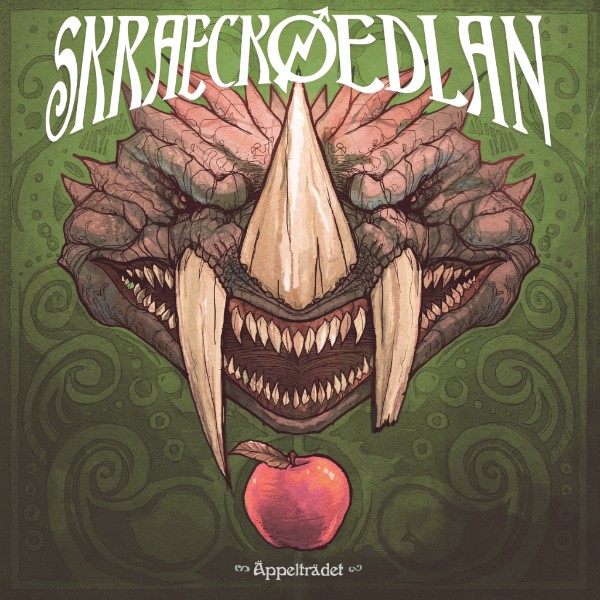 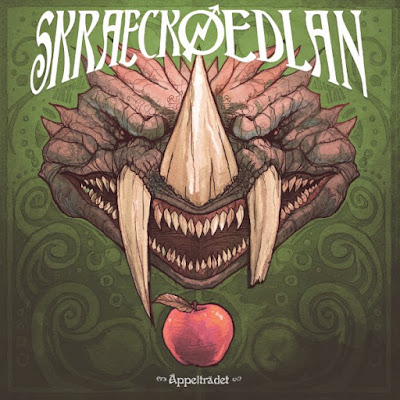 Fuzz-science fiction rockers Skraeckoedlan are set to do the international release of their debut album ‘Äppelträdet’ (The Apple Tree), the 12th of October. Since its initial release 2011 in Sweden, ‘Äppelträdet‘ have been a gem hard to find. When the album was first released it reignited and marked the start of the modern Swedish stoner scene. The record will be released through The Sign Records and comes available on CD and vinyl with world wide distribution.

Äppelträdet is available for pre-order HERE

Originally recorded in 2010, in Truckfighters’ Studio Bombshelter, the album will once again see the light of day this fall, when it returns as a 180g transparent green vinyl housed in a single sleeve cover with updated artwork. A CD version with the original artwork will also be available, both versions featuring the ten seeds that grow to be the Apple Tree.

Also emerging anew are Skraeckoedlan themselves. While still singing in their native tongue, telling stories about mythological beings and cosmic wonders, having just come out of hiatus the band recently made the transition from quartet to trio. The as of now three-piece shares the following words concerning the reprint:

“The reissue of Äppelträdet is, in a somewhat allegorical sense, a celebration of what has been and to a certain extent of what still is, but it also serves as a kind of bridge to what will be. These are our roots and they grow deep.” 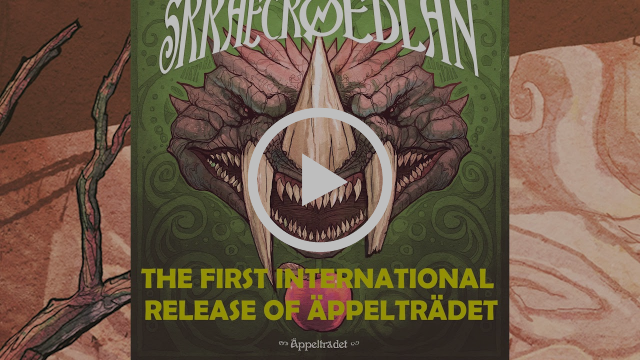 Heavy riff power trio Skraeckoedlan are telling tales draped in metaphor. Fuzzy stories buried in melody are cloned into a one of a kind copy of an otherwise eradicated species. Previously found only in Sweden, this cold blooded lizard have once again started to walk the planet that we know as earth. The extinct is no longer a part of the past. Skraeckoedlan is the best living biological attraction, made so astounding that they capture the imagination of the entire planet.

The dinosaurs are believed to have made their first footprints on our earthen floor some 240 million years ago, during what is now known as the Triassic period. Indisputable behemoths and apex predators amongst them, they wandered freely and soared sovereign, ever evolving as the impending Jurassic and Cretaceous eras unfolded. Then, 65 million years ago, it stopped. Be it by asteroid or volcano, the dinosaurs’ fate became one shared with most species ever to inhabit our pale blue dot, extinction.

While Skraeckoedlan translates into something like dinosaur, an analogy better drawn is perhaps one to the great lizards’ descendents, the birds. In their flight there is a, quite literal, escapism to be found. A vital ingredient, encapsulating the bands very being. Although escape, it should be said, not necessarily in the sense of shying away but rather as a recipe for observation and introspection. A kind of fleeing of everyday worries in benefit of larger and hopefully more profound queries  A bird’s-eye view, if you will.

“Our music is, in addition to good fun riffery and hard hitting drums, the very lens through which we watch life”, the band collectively states. “Meaning that to a degree music is ever present. It’s how we explore and how we tell stories our words can’t comprehend. It is uncertainty and apathy, anger and frustration, joy and euphoria and all the heartfelt beauty that’s to be found in the process of creating.”

Quite a few million years later than their reptilian namesakes, Skraeckoedlan is leaving their own footprints in earth’s soil, albeit not as physically grand. Their self proclaimed fuzz-science fiction rock is an homage to the riff, vehemently echoing throughout the ages like that of a gargantuan Brachiosaurus striding freely. Equal in weight to the deafening heaviness of a Skraeckoedlan melody, these long-necked colossals further possess in their very defining feature the weapon needed for a complete experience of such melodies. Although strong neck or not, once in concert heads will, regardless of intent, be moving along.

Through their natively sung lyrics Skraeckoedlan invites us to partake in a world of cosmic awe inhabited by mythological beings and prehistoric beasts, like the immense havoc wreaking reptilian awakening from its slumber in the polar ice caps, featured on the debut full-length Äppelträdet (The Apple Tree), or the reclusive great ape Gigantos, solemnly wandering his mountain as one of several entities on the follow-up, Sagor (Tales). Against backdrops like these, underlying themes of the aforementioned big picture-nature are being explored, much in the spirit of, and hugely inspired by, great minds such as Alan Watts and Carl Sagan, fantastic creatures in their own respective rights. Since Mr. Sagan has been briefly referenced at the outset, it is Mr Watts, musical adventurer as he was, that will begin to play us out:

Still far from going extinct, releases old and new just around the corner and eras untold waiting to be explored, a statement that rings painstakingly true, as Skraeckoedlan closes with a similarly mannered reflection:

“Our volcano has yet to erupt, our asteroid has yet to fall. When our end, whatever form it may take, inevitably comes, it is with the utmost gratitude and curiosity that we’ll return to the cosmos, hopefully to be kept in its thought.”
album reissue Album Release appeltradet CD pre-order skraeckoedlan stoner rock the apple tree the sign records vinyl