AMERICAN AMNESIA - Yet Here We Are 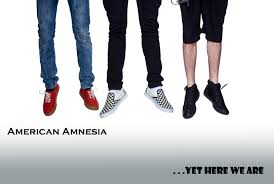 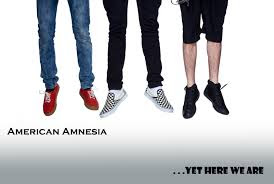 American Amnesia  is a band of teen musicians that hail from Torrington and Winsted, CT. The band is Patrick Nemaizer (19) on vocals and guitar, Sam Cesnak (17) on drums and Gus Pac (16) on bass. The band plays a mix of hard rock tinged with a bit of alternative.

The playing is tight, some nice solos that will make the air guitarists happy, pummeling drums, a thick low end of vocals that sound like a classic rock band from the late 70s, lots of emotion, clear and perfect for this band. “The One” is a fantastic song that I would have thought was a forgotten gem from the 70s. It sounds classic, has amazing guitar playing and the vocals are glorious. The band sounds like they have been playing together for a long time, nice cohesive sound and no way would I have believed that they were this young, no way! The playing and songwriting are very advanced and show that they know what they are doing. You can hear the fun that they are having and the passionate vocals are something that really stands out. “Questions in the Dark” is a dark and plodding song, but plodding in the way that Black Sabbath used to drag you down and drag you through the music, with your face down and a heavy weight on you…kind of cool.

The whole album is like this, heavy with touches of their influences, but still original enough to make it a great listen, matter of fact, I think I will throw this one in the car and crank it up with the windows down…the hell with the air conditioner.