The Doobie Brothers – The Captain And Me 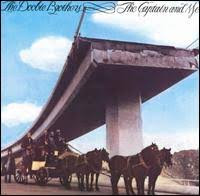 According to my Google search, this album came out when I was 10 years old. I've so far managed not to break my arm whilst patting myself on the back for my great taste in music. Who can say why 10 year old me dug this album so much, but it really did strike a good vibe with me and it still does to this day.

If you only know the Doobies by their big hits you might be missing out, and you might want to pick up a couple of albums just for the album cuts. Take this one, for example. Everyone knows the monster hits “Long Train Runnin'” and “China Grove” from this one. For my money, though, the killer tracks are numbers 5 and 6, respectively. “Clear As The Drive Snow”, track 5, is a really cool song that moves between acoustic and electric moments, and seems more like it is divided into movements rather than just being a typical rock song. I remember being kinda mesmerized by this one when I was younger and it still has that effect on me. I'd really like to grab a couple of guitar playing buddies and work this one out.

Track 6, “Without You”, is conversely, a straight ahead rocker. At least as much of a rocker as the AOR stylings of Ted Templeman's production would let it be. I never got to see these guys live with this lineup, being too young, but I bet if they played this one they really let it rip. I like the feel of the song as it kind of grinds to a stop about 2/3's of the way through, almost like the moment when the guy comes out to put the cape on James Brown. Then they stand up and throw the cape off and rock out for another minute or two. Good stuff.

The entire album is good and shows different sides of the band. There are minor key songs, ballads, even a little funky rock. Three of the songs even deal with getting back to the land and simpler things, so there's definitely that early 70's California hippie thing going on. I don't know these guys so who knows if it is sincere or not, but they sure make it sound that way.

Its fun to go back and re-visit things from my youth. Some of the albums I really loved back then are straight up classics, like Deep Purple's “Machine Head” and “Made In Japan”. Others, not so much (I'm talking to you, Styx, and your “Paradise Theater” nonsense). Maybe when you're feeling a little jaded with the music and the world around you, go find an album you loved when you were younger and give it a listen. Even if it sucks to your adult ears, I bet it will bring back some good memories, and that is never a bad thing.