It is with a heavy heart that I write this memorial.  I met Gregg and the band Seventh Sign way back in the early 90s when they were opening up for Dee Snider's Widowmaker in a small club in Amarillo, Texas.  Due to a freak accident where the drummer hurt his hand Widowmaker was not able to play.  Gregg and the guys took over and did a double show always interacting with the crowd and also taking time to meet everyone there.  We became friends over the years.

I saw Gregg and his bands several times.  No matter who he was with he was always the same down to earth nice guy and he always took time to meet anyone at the shows.  Gregg also had one amazing voice.  It was very melodic, but also very powerful.  Gregg passed away on January 4th, 2018 when he lost control of his motorcycle and was killed in the crash.  Gregg was wearing a helmet.  It was just a freak thing.

To his family, friends and fans I offer my condolences.  I will miss him greatly.  Gregg will always live on thru his music and the warm feelings his fans and friends have for him.  Gregg was also an artist, sculptor, and speaker at the time of his death.  He was a Curator at the Indian Pueblo Center in Albuquerque, NM.

RIP my friend.  You will be greatly missed but never forgotten. 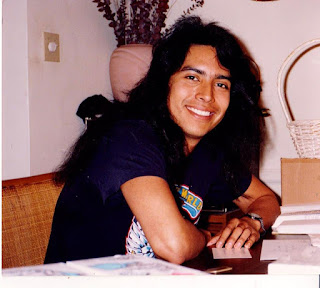 Gregg when I met him in the early 90s 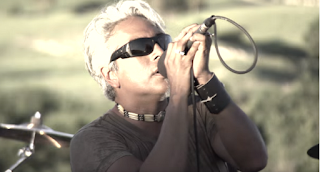 Gregg as he was when he passed
Posted by The Ripple Effect at 12:30 AM