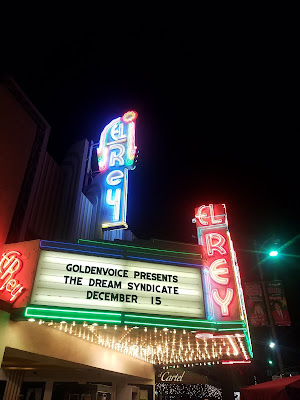 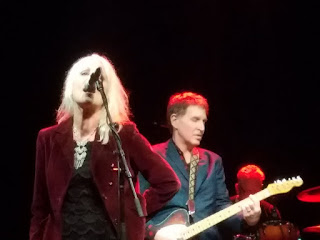 On the title track to Dream Syndicate's stellar new release "How Did I Find Myself Here", Steve Wynn's protagonist asks himself that very question in the song's sparse chorus, which he repeats a few times sandwiched between extraordinary lead guitar pyrotechnics from the band's new guitarist Jason Victor.  When Wynn sang the lyric from the El Rey Theatre's stage on Friday evening December 15, I am not sure how exactly, but where Wynn found himself was back in the welcoming arms of the city that gave birth to the band over thirty years ago.  One of the standard bearers of the LA sub-scene Paisley Underground in the early 1980s, the band's earlier music was considerably darker than their compatriots’ such as jangle pop Rain Parade and baroque Brit-rock of the Three O'Clock.  Wynn reformed the group recently, with original drummer Dennis Duck, and newbies Victor on guitar and Mark Walton on bass, and the new record is even better than its celebrated 1980s release The Days of Wine and Roses, with more melodic Doors and Velvet Underground elements softening their grungier Stooges-like brooding intensity. 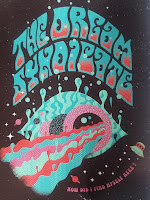 The Syndicate's SoCal homecoming would have been triumphant enough with just a healthy mix of songs from those two standout albums, but the audience was treated to more.  Joining the band on keyboards was Chris Cacavas of Paisley Underground veterans Green on Red, whom Wynn told the crowd he'd picked up along their travels in Germany to play with the troupe, and an especially delicious surprise was watching original bassist and vocalist Kendra Smith take center stage for two enchanting encores.  Looking like a postpunk Stevie Nicks, with arms flailing and blonde locks drooping playfully over her black-clad shoulders, her vocals having grown even huskier and more mesmerizing over the decades.  What a return to glory.  Is LA the best rock and roll city in the world or what? 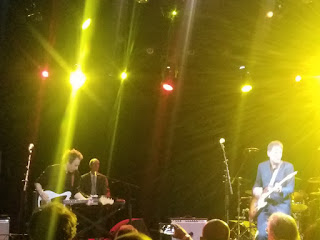 -Rhythm Slayer
Posted by The Ripple Effect at 12:30 AM