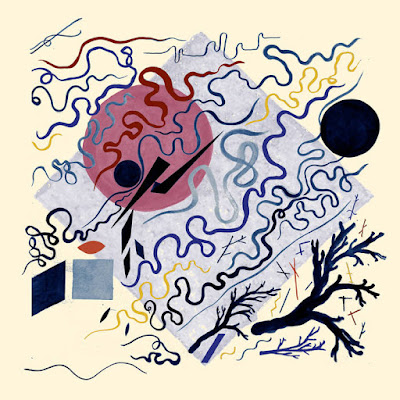 Greetings waveriders!  It's your old pal Penfold coming to you with a new musical recommendation.  Today I'd like to highlight an enchanting album that managed to escape my notice when it was initially released.  Thankfully I stumbled upon it recently and these tunes have been played repeatedly ever since.  Yes my friends, This Guitars from Grandkids is definitely worthy of your time and interest!

What makes this release so interesting to my ears is the difficulty I have in firmly nailing down an accurate description of the band itself.  Is Grandkids a folk/americana outfit?  Yes, I would say the bedrock of the group's sound is folk music but that is simply the jumping off point.  From there you must factor in noise rock, classic rock, jazz, as well as more exotic musical strains that influence the proceedings.  Also, vocalist Vivian McConnell effortlessly grabs the listener's attention thanks to her elegant, insistent voice.  Her tonality and the technique she utilizes remind me of Exene Cervenka.

Grandkids' songs fluidly lead into one another but they don't hesitate to throw curveballs.  For example album opener "Dust Cabin" begins with a rather subdued, confident swagger.  Shortly thereafter the listener is hit with heavily distorted guitar along with thumping, downbeat-emphasizing drums.  You might expect the remaining songs to follow a similar sonic template.  Two tracks later however "Dinner Women" sounds like the result of adding discordant melodies to a 1960s psychedelic folk song.  "Only To Be Blue" is a wonderfully jazzy number.  "Royal Jam" leans heavily on a noise rock vibe.  "Pinball" could have been taken from the sessions which spawned Led Zeppelin III.

What I am attempting to say waveriders is that despite all the unique qualities of these songs, they combine to form a bewitchingly cohesive whole entitled This Guitars.  I used a descriptor in my introduction to this review and I'm going to use it again.  Grandkids produce enchanting music.  Feed your ears and pick up your copy of this album today!