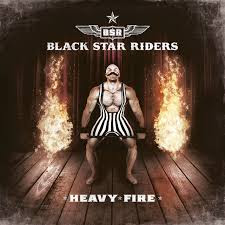 This gem that is 'Heavy Fire' has been out for a while now and like very fine wine, it has aged amazingly well. And that’s the reason why I took my time to write this review. Black Star Riders have been close to my heart from the moment I heard they had formed. After all, Scott Gorham from my favourite band of all time, Thin Lizzy, got the band going with Ricky Warwick from another favourite band, The Almighty, so of course, I would be into them. Even though their first two albums, ‘All Hell Breaks Loose’ and ‘The Killer Instinct’ are very good in their own right, they both show a band trying to find it’s identity, where especially ‘The Killer Instinct’ quickly lost momentum. And that’s why I used the long time frame to put these words on paper. I wanted to give the new wax time to breathe. And it sure as hell paid off. Because on ‘Heavy Fire’ all the pieces have fallen in place and Black Star Riders are finally Black Star Riders with a killer album to match.

The title track catapults opus number three into orbit immediately with it’s hard, razor sharp riffs and super heavy rhythm section. And I think it’s safe to say that the song epitomizes what Black Star Riders are. Every little piece used to form and shape the band is featured and the end-result is fantastic. ‘When The Night Comes’ keeps the pace with a heavy rocking chorus while the verses bring out that punk and diesel attitude The Almighty perfected. And man, Black Star Riders are on fire. Scott Gorham’s past comes out beautifully in ‘Dancing With The Wrong Girl’. The heritage of Thin Lizzy is all over the place, if you ask me. The storytelling, the harmonies, the solos, you name it, making it a brilliant homage to the best band in the world. ‘Who Rides The Tiger’ hits the ground running as the band elegantly rocks hard, real hard pounding the listeners into the ground with a music barrage of unheard of portions. So by the time ‘Cold War Love’ starts it gives you a chance to catch your breath. Being the closest thing to a ballad it allows an old timer like yours truly to ponder one’s ability to keep up with even older guys who kick your ass so easily. Not that I’m complaining but this sad song of longing and despair is the perfect bridge back into heavier rock territories.

A little bit slower but full of mesmerizing twin-axe harmonies and some sweet bluesy solos, ‘Testify Or Say Goodbye’ grabs you immediately and reels you in hook, line and sinker. ‘Thinking About You Could Kill Me’ ups the ante with a thumping bass guitar line leading the way until the song gradually becomes heavier and rockier. Semi-heavy and bluesy in approach which goes back and forth between sombre explicit parts and more in-your-face attitude, ‘True Blue Kid’ has an amazing exchange between guitarists Scott Gorham and Damon Johnson through the solos and harmonies. Beautiful, waveriders, beautiful! A strange yet spellbinding mix of heavy blues, punk - mainly in the vocal and lyric delivery - and soul ‘Ticket To Rise’ confirms even further that Black Star Riders have honed in on their own sound. Up front and personal, the band is on fire, to say the least. Ending with a more punkish song in ‘Letting Go Of Me’, especially in attitude, the guys add sharp riffs as well as melody resulting in a perfect closer.

An album you go back to time and time again, is the perfect sign of greatness. Whether it’s on constant play or sometimes put away only to be frequently revisited, either way is, in my opinion, one of the biggest compliments you can give a record. And ‘Heavy Fire’ falls into this exclusive group, and then some. Black Star Riders has finally reached that place where everything they do is right, which, in turn, means the album(albums) they release are going to have a great lasting effect. A fantastic third recording by a band who deserves the greatest accolades. Don’t miss out, waveriders!