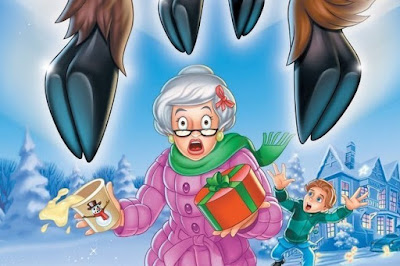 He’s making a list and checking it twice, gonna find out who’s naughty and nice, Bucky’s Bandcamp Bonanza is coming to town…. He sees you when you’re sleeping, he knows when you’re awake, he knows when you’ve been bad or good, so be good for goodness sake, Oh, you better watch out, you better not cry, you better not shout I’m telling you why, because clean vocals are better and you might not make it on the bonanza feature. SCREACH! Oh sorry there, I got lost in the moment. Check out these bad boys and leave a new Bandcamp Gift Card for Santa so he can stream some killer jams on his sleigh ride across the world. These are all both naughty and nice albums.

AUX - Troubador
Hold everything boys and girls, there’s a new pink tank band in town. The cannons are firing louder than ever, rifling out tight patterns of progressive heavy, reinforced with jagged riffs and atmospheric melodies. Absolutely sublime!

Catapult the Smoke – Born Again
Catapult the Smoke have birthed a first class assault of massive riffs, crushing, yet melodic, vocals and progressive layers of intense groove on ‘Born Again’. This is how it’s done folks. Ripple Rock of the highest caliber.

Dead Harvest – Wasted Love EP
Wasted Love wastes no time in demonstrating its ability to shred the airwaves with a wasted assault of psychedelic riffafe. The pop-fueled vocals pair with an insane mastery of guitar jammanship to give this EP a deadly combo of holy shit inducing spine tingles.Favorite track: Wasted Love.

The W Likes – The W Likes
Like the infamous Mr. Rodger (Steve) says, this is glistening with swaggering fuzz. Got the Orange Vinyl, which compliments the album cover art, that compliments the barbaric riffs, desert crusted vocals and blistering groove. I W Like this very much.Favorite track: In A Mind.

Warlung – Sleepwalker
I haven’t added this one to my collection yet, don’t ask me why. Probably just being the cheapskate that I am. But I am strongly recommending this Houston Texas band Warlung. This stuff is hard hitting, super psychedelic with a mild occult vibe going on. Everything is bigger in Texas and the riffs here are BIG.
“Founded in 2016, former members of Houston's The Dead Revolt and Rivers joined forces to push the limits of song writing and creativity. Inspired by the sounds of old, WARLUNG has taken what the 70's era of rock and psychedelia gave us and turned it into a hi-powered, white knuckled ride, down the rock n' roll highway. The debut album is entitled, "Sleepwalker"

Strap your belts and fasten your helmet tight, come December 6th, the sound barrier will break with a blustery explosion of rustic Sabbathian doom. On Lunar Highlands is an epic musical journey clod-hopping through dusty belts of asteroid rock by way of distorted delta blues.

Octopussy – Dwarves and Giants
Octopussy is back with a rife stench of powerhouse riffage echoing with melodious keys, retro-tinged reverb, and a stellar spin of hard charging heavy blues. Dwarves and Giants has surpassed all expectations of greatness with this immaculate display of modern stonerfed arena rock. Imagine Clutch meets Audioslave loaded with a diverse array of psychedelic grandeur. And don't forget about that drumming.... Favorite track: Birdman.

There’s a few stocking stuffers for you! Ten to be precise. Merry F’ing Christmas Waveriders!!
If you’re lucky you won’t shoot your eye out listening to that super pack of tunes but watch out anyway as this shit is so rowdy Santa’ reindeer will surely be plowing over Grandma unless Grandma is listening too. And as I mentioned at the beginning I am making my list, don’t know if I’m checking it twice, and it’s not going to be easy that’s for damn sure. Expect a Best of Bonanza list at the end of the year.