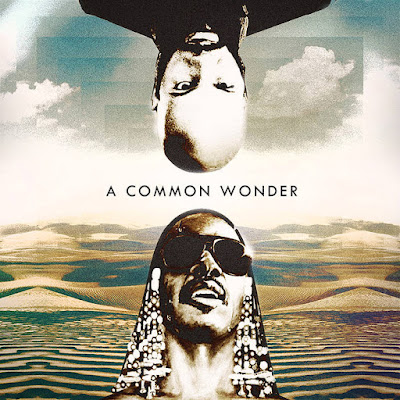 Mashups are tricky things waveriders.  In my opinion musical mashups are even trickier.  We've all surely heard two different songs hammered together in an ear pleasing manner.  The tricky part lies in finding musical combinations that are not only fun to listen to, but also genuinely fulfilling.  Creating these magical aural collages?  That is where Amerigo Gazaway comes in and excels!

Amerigo Gazaway is an artist I've followed ever since I first heard his album Bizarre Tribe: A Quest To The Pharcyde.  His superb craftsmanship allowed me to hear music I was already enjoyed in a whole new light.  Time passed and Mr. Gazaway kept releasing stellar work.  In fact I thought so highly of his project entitled Yasiin Gaye: The Return I wrote an exceedingly complimentary review for this very site.  Fast forward to present day and we see the release of this man's latest masterpiece, A Common Wonder.

What makes this album so special you ask?  I'm going to circle back to a point I made earlier.  The fourteen songs (fifteen if you count the bonus track) that make up A Common Wonder are not only fun to listen to, but they are fulfilling as well.  What that means to me is rather simple.  Although I'm a fan of both Stevie Wonder and Common when I hear A Common Wonder it doesn't make me want to go back and listen to the original compositions.  I want to hear these tracks again!

It is uncanny how easily Amerigo Gazaway enables his listeners to temporarily live in a world where these seamless mashups actually occurred.  There is absolutely nothing out of place.  Nothing ruins the illusion.  Pick a track, any track.  "Sugar By The Pound", "Resurrection To Higher Ground", "The Sixth Superstition", "I Was Made To Love Her", "Living For The Chi-City", it does not matter.  Everything sounds as if it emerged naturally from one recording session.

Waveriders, if you have not experienced the wonderful work of Amerigo Gazaway now is the perfect time to jump onboard the bandwagon.  A Common Wonder is nothing short of phenomenal!  Listen, enjoy, download for free, support.

Email ThisBlogThis!Share to TwitterShare to FacebookShare to Pinterest
Labels: a common wonder, amerigo gazaway, common, free download, i was made to love her, living for the chi-city, mashup, Stevie Wonder, sugar by the pound, the sixth superstition