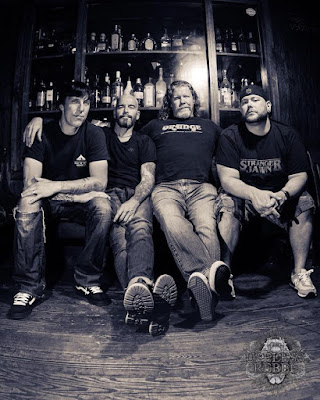 Sorry for failing to avoid the fat riffs and deep grooves that have been invading my bandcamp lately. It’s become not only an ongoing problem, but a first world problem that I cannot live without. I say you cash your paycheck at paypal via bandcamp this week and sit back and let the power of the riff compel you. Holy smokes do we have a treat for you!

Ignu – Lightningflash Flintspark
The deep, slappy bass line rumbles against a proto-tinged psychedelic flair with shades of acidic 70s underground. Riffs baked with sun fried fuzz distort above the land called ‘Warsaw’ as a disturbingly pleasant groove fills the stage with a killer Polish accent. Btw, how cool of a name is Warsaw? Thanks to Jonny P. for this stunning find. Favorite track: 07 - Endless Rift.

Spacelord – Spacelord
What we have here folks is a huge slab of stoner madness. Repeat plays are mandatory and invigorating. Push play and listen to what the hard rock is cooking.
Just when you thought we couldn’t have another Sabbath inspired hard rock band come in and sweep us off our feet, Spacelord hits us with a dazzling output of warm, fuzzy hooks, piercing vocals, and heavy blues infused stoner rawk riffs. Equal amounts of Zeppelin influence to Sabbath buzz. Huge infectious groove through and through.

Gypsyland - Gypsyland
The backstory behind this album is enough to purchase without even hearing it. After listening, its clear that the music is even better than the backstory. With their 90's grunge roots rolled in their sleeves, Gypsyland pack a kick-ass progressive flair of grooving riffs ranging from arena-tinged arena anthems to deeply intricate, well written rock and roll compositions. It would be a shame for this to go unnoticed.

Angus Black – Angus Black
This one was super fun to review as by the time I was ready to contribute my turn, the fans had already started an AC/DC tribute obviously in reference to the band name. Of course we all know Angus Young and these guys sound nothing like him, other than they kick some major doom ass in a similar fashion. It’s unknown at this time if the guitarist is decked out in schoolboy attire, but regardless the riffs are trippy and groovy as shit.
FDJ and Paul Rote have some BIG BALLS making those AC/DC jokes. A TOUCH TOO MUCH if you ask me. While Pepe Roni cuts the cheese with the much more apt Uncle Acid comparison I couldn’t pass the opportunity to join in on the fun. It's gonna take a WHOLE LOTTA ROSIE to yank this fuzzed out stoner doom from my speakers. Favorite track: I'll Guide You Home.

Deep – Deepkvlt
The groove runs DEEP with soaring psychedelic grit, progressive stoner riffs and titilating fuzz. Take a look into her eyes and tell me what you see. Favorite track: Mind Control.

Deadly Vipers - Fueltronaut
Wow, not much else to say as just WOW. At this moment in time I only have one listen in and am gasping for a breath of air. I feel like I’ve been drifting
Deadly Vipers strike with a venomous attack of space-age desert rock preaching the gospel of Kyuss at the altar of Truckfighters. The lethal vocal chops gnaw away with relentless hooks, low end rhythm and addictive solos.

The Age of Truth – Threshold
Since we’re talking the truth I’ll be honest, Ripple Music would have signed these guys had we been in tune earlier on in the game and with adequate time to prepare for a proper release on the roster, which is packed in case you haven’t been paying attention. Have no fears though cause the Ripple equivalent across the pond, Kozmik Artifactz signed a deal to release on their killer tribe of bands. This is an absolute beast of a hard rock album and down to earth guys to boot. Prepare to be riffed to pieces by the debut into the heavy underground family via Threshold.
Truth be told, Threshold slams groovy riffs down harder than a lie detector test on on the mainstream media. The vocals ooze with masculinity as the guitar strokes us with breakneck precision guided by tight brooding rhythm. Stadium rock for the underground masses! Ripple Music approved, Kozmik Artifactz tested, pick this up today and save the lies for tomorrow.