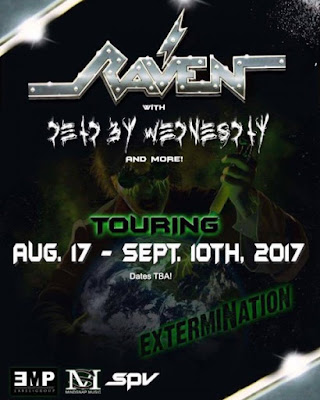 Edge Of Zephyr opened the show with some excellent heavy melodic music.  The set list was Memories, Living With the Beast, What Have I Become, Desperation, and ending with Tidal Wave.  This was an excellent band to start off the show with and the crowd was really into them.

Hard Truth was next.  Unfortunately I didn’t get a set list from them but they did play some amazing covers from Black Sabbath, Judas Priest and many other bands of that genre.  Another band that the crowd seemed to really enjoy.

Next Up was Bobaflex.  This might be one of my favorite bands that I’m just getting into.  They really rocked the crowd with lots of audience participation.  The set list was I am a Nightmare, I’m Glad Your Dead, Chemical Valley, Mama Don’t Take My Drugs Away, Never Coming Back, Long Time Coming, Hey You an excellent rockin' Pink Floyd cover that had the band singing along to, and Bury With My Guns On.  What an amazing show with awesome musicianship and some great guys.  I took my kids to this show.  It was their first rock concert.  After Bobaflex played Marty from the band gave my kids a cd each which was really cool of him.  What a really nice guy.

Dead By Wednesday was next.  The set list was Self-Medicate, Shipwrecked, Live Again,
Power Troopers, Break When I'm Dead, Pawns and Domination.  These guys were fast, mean, heavy and straight on power with deep growly vocals.

Now it was time for the headliner Raven.  It had been 17 years since I had seen my friends in Raven play and they did not disappoint.  They were every bit as fast, heavy and on the spot with every musical note.  The set list was Destroy All Monsters off the new cd Extermination.  Any fan of Raven must have this cd.  Hell Patrol, All For One, Hung Drawn and Quartered, Rock Till You Drop, an awesome Guitar Solo, Battle March Tank Treads, Stay Hard, Firepower, Faster Than The Speed Of Light, On And On, an amazing Bass Solo, and ending with Break the Chains, Born To Be Wild and Crash Bang Wallop. These guys gave every ounce of energy that they had from the first till last note and the crowd left completely satisfied.