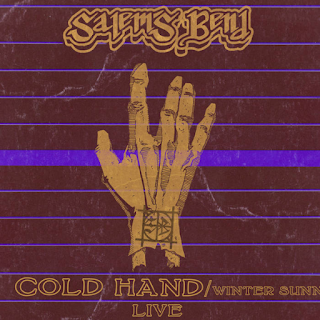 On the eve of their two-week tour of the Western United States, Salem's Bend has teamed up with Ripple Music to release a live 2-song, free download EP and and a brand new video for the A-side song, Cold Hand.

As main man Bobby Parker tells it, "Before we started to work on the second album, we wanted to get a couple new songs out. “Cold Hand” is a song that we jammed out together, and we have been playing it live for the past several months. It’s fun to play, as it has a lot of improvisational parts that we feel out as a band, so its never quite the same twice. Because of that, we figured we’d record the song live to try to capture that essence. Kevin is a great director/cinematographer and has some killer film gear so we figured why not film it as well!

Since Cold Hand is such a long song, we figured we counter that with a faster and shorter track for the B-side “Winter Sunn.” We wrote this one really quickly together in the studio and recorded it the next week at the same time we recorded Cold Hand, in the parking garage. We’re happy with the way it turned out and think its a good counterpoint to the more epic A-side."

Salem's Bend are heading out on another summer tour of the Western US, covering some new ground and new states this time. The first half (minus a few dates on their own) will be with the Ripple Music labelmates,  War Cloud, and the second half will be with heavy San Jose rippers KOOK.    Kicking off the tour in Vegas on July 12th with Ripple Music labelmates and road brothers The Rare Breed for a rad show setup by Vegas Rock Revolution.

Check out the premiere of the new Live video for Cold Hand on The Obelisk and be sure to check out the free 2-song Live EP download at the Ripple Music Bandcamp.

Salem’s Bend is:
Bobby Parker – Guitar and Vocals
Kevin Schofield – Bass and vocals
Zach Huling – Drums
Posted by The Ripple Effect at 12:30 AM