Bandcamp Bonanza – Show Me Your Horn 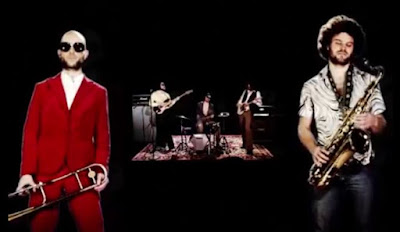 I don’t know when it finally sank in, what I was doing, or why on earth I’ve been so excited about it lately. But the horn in rock n roll has been something I have really been enjoying lately, I’ve even ventured into to soul/R&B/Jazz type music which employees a hefty amount of horn and its just a great break from the day to day standard 4-piece rock band. Anyhow, not to bore you with any details, below you’ll find a slug of albums that blew my horn, and one of which actually does master the art of the rock horn.

Blind Horse – Patagonia
South America has been making noise in the heavy sludge scene for quite a while. Blind Horse take the path of psych on their journey to Patagonia. What a stunner although it took me a couple listens to fully get into the groove. After a couple listens I found myself not wanting to turn it off and just keep repeating.
Blind Horse navigate the midnight pampas with an illusory vision of crushing rock n roll. The Brazilian stoner funk destroys the airwaves with poignant psychedelia, dynamic riffs and a tranquil groove. Think the South American 'Jeremy Irons and the Ratgang Malibus' Favorite track: Soul Locomotive.

Blind Mess – Blind Mess
This one popped up on the feed a week or so ago and I gave the preview tracks a spin. Well consider me impressed as the vibes were strong right away. Fast forward to adding to collection I received the full album download even though it is still on pre-order. Whether it was a glitch or the band wanted me to hear the whole thing early I listened and I listened repeatedly. You have nothing to lose by placing that pre-order now.
The downtuned serrated riffs throttle wide open like a dirt bike across the German desert fueled by high octane punk. The stoned out distortion creates a hot mess of deep cuts penetrating like carb cleaner on a fouled plug. Favorite track: Capricorn.

Samsara Blues Experiment – One With The Universe
Unfortunately (but fortunately) I do not have this in my bandcamp collection. I pre-ordered the vinyl from the label and since received along with their available discography on wax. SBE play an expansive progressive heavy psych that hits you like a ton of bricks with heavy riffs, trippy solos, and hazy vocals. One of the better psych albums of the year no doubt.

Baleful Creed – Seismic Shifter
I am a big fan of these guys. I reviewed their self-titled album in full here back when I was working with Grip of Delusion Radio’s short lived blog, and they finally released their acclaimed new one called Seismic Shifter. They play straight on hard groovy rock n roll that sinks in almost immediately. Having had a promotional copy for a while, Seismic Shifter quickly became one of my most played new albums of the year with its catchy chorus lines and powerful vocals.
'Seismic Shifter' picks up right where the debut left off amassing a 10 on the "riff"ter scale. The strapping vocals tremble with a mountain splitting groove as catchy as "A-fuckingmen" closing a beer bong prayer in church. Highly addictive album.Favorite track: Baleful Creed - Lose Religion.

Green Lung – Green Man Rising (Single)
Singles are hit and miss most the time but it is refreshing when you hear a new one, especially when its submitted for review among the army of shit we get sent in on a daily basis. Green Lung isn’t recreating the wheel but they exhibit something worth sticking around for to see what’s next.
Green Lung take a sweet doomy drag of dank jams on their debut single filling the aural lung with a paralyzing stench of stoner blues meets psychedelic riffs that will have you flying high like a freak on a peak.

Coogans Bluff – Gettin’ Dizzy
What more can I say about this band? Probably a lot, but to spare you the time I demand you listen to their entire discography and report back to me that what you heard was nothing but exquisite. They incorporate the saxophone and trombone into their funked out stoner blues rock to create a mystical aura of hard rock tunes. The horns work and create a funky atmosphere to the already heavy grooves. I found them years ago on iTunes via some youtube videos that are not only hilarious, but demonstrate their ability to really play a unique take on rock n roll blues. I recently purchased the available vinyl directly from the band which can be viewed on Noisolution Records store, but unfortunately doesn’t work too well in the USA. The band hooked me up with 4 of the albums including a limited and numbered 7” single sung in their native German tongue. I’ve made the claim that these guys fit The Ripple Effects slogan of “The Best Music You’re Not Listening To”

Hope you enjoyed this edition of Buckys Bandcamp Bonanza and see you in another week.