STERILE JETS - No Gods No Loss 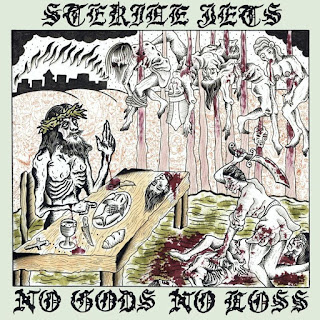 The band featuring singer/guitarist Robert Bly Moore, singer/bass player Wm. Partnoff and drummer GS Bean is a true democracy. They compose and arrange every song to bring out its best elements, delving deeply into punk, post rock, jazz and metal, with stimulating side trips into rockabilly, grunge and even pop. The noisy songs are very similar to what SST Records was putting out in the mid '80s after they went away from straight punk rock and into more avant-garde music.

The songs are pure noise-filled hellions that challenge the listener with a complete lack of clarity and clean sounds, instead you get an album of intensity and insanity that nowadays is so refreshing since no one really does this anymore. You have touches of John Lydon, Cheech Marin doing his Alice Bowie character, and Jello Biafra in the singing with the inflections that are sometimes all in the same song. The anger and bitterness are like a kick in the groin throughout and really adds to the filthiness of the mix. "Piss On Your God" is a swirling tempest that grabs you and won't let you go, not that you would want it to because it's one hell of a ride and one of the greatest songs on here. The playing is sloppy, the vocals are crazed, noise, noise, noise, and the band playing like they are trying to destroy their instruments just make for a debauched and amazing journey.

Put this album on and piss off your family, open your windows and piss off the neighbors, but you will love every second of it, both the music and making people crazy. This kids is what punk rock was blending with back in the old days and very few managed to get it as right as these guys do.