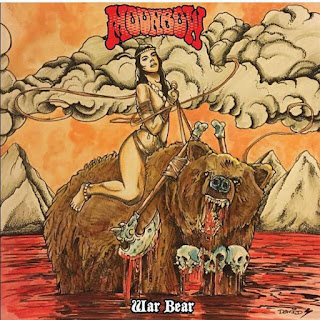 I am always searching for good ol' straight ahead rock music. Sometimes I want to hear some meat and potatoes stuff, and one of my complaints about so-called “modern” rock is that it just gets a little too fancy, it gets in its own way. Then I hear an album like this one from Moonbow and it puts a big smile on my face to know that there are bands out there that still do it like this.

Please don't get me wrong, I don't mean meat and potatoes rock as any kind of put down or insult. And I don't mean in any way that these guys are not talented. I just want an album that will grab me by the throat and beat me over the head for a while, and this one works for me.

This one comes with a little southern seasoning as well, which for me is always enjoyable as it means I get to have a little swing and swagger with my rock. This is an album with two hands full of tasty tunes that are well written and well played. Some of them are hard charging and full of rhythm and boogie, others are a little more laid back and introspective. All in all it makes for one of the better releases that I've heard so far this year.

The title track kicks off the album and its a favorite of mine. The band comes charging out of the gate on this track and like several others on the album, its a thick, greasy slab of goodness. Bands and producers seem to have forgotten the art of album sequencing but I always enjoy an album that can grab the listener from the first beat. There is a nice acoustic breakdown at the end of the song as well, with traditional folk instruments. I'm a sucker for a fiddle and there's one in the mix so this track has all the ingredients for me.

“Bloodwash” is one of those more laid back tracks I mentioned and it is a good one. After a few pedal to the metal tracks I enjoyed hearing the band pull back a little and show another side to what they do. I love the way this track builds and how the vocal lines and guitar leads and fills play around the beat, which is a nice touch and keeps the listener's interest. This track is very well crafted and to me shows a band that has a great idea of what they want to do, as well as the skill and talent to execute the idea.

To my ear, you can't go wrong with this album. It's a great way to spend 45 minutes and it's an album that you want to really listen to, not just have on in the background while you're doing something else. It's important to unwind sometimes and enjoy the better things in life. When was the last time you put on some music and just listened? If it's been a while, might I suggest that you change that and give this one a well deserved listen?