Witchery - In His Infernal Majesty's Service 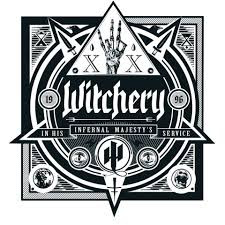 Track one, "Lavey-athan" (geddit?), replete with Reign in Blood-era Slayer-isms (as is this whole thing, though in an inspired, and cooly-derivative, way): new vocalist is harsher and less operatic/ Rocky Horror Picture Show than previous vocalist Legion was (though, truth be told, I liked Legion's over-the-top/ tongue-in-cheek delivery)--

Track Two, "Zoroast," [at least they're perjuring every other religion...?] opens and closes like a Ramones-esque Satanic jam; pretty sweet, actually. Track three, "Netherworld Emperor," rages out in full Celtic Frost-mode, complete with a breakdown [maybe the "Emperor" in the title is  a giveaway, huh?], track four, "Nosferatu" is Slayer's "Postmortem" part 2, [and not entirely unnecessarily, either, like you'd be forgiven for thinking so] and track five, "The Burning of Salem," rampages like Tom Araya on acid mixed with pharmaceutical-grade multivitamins.

Finally, we get to the best tracks on here, numbers 10 and 11, "Feed the Gun," and "Oathbreaker," which, though generic, are as pure fire as you'd believe a European death/trash band could summon  via digital media.