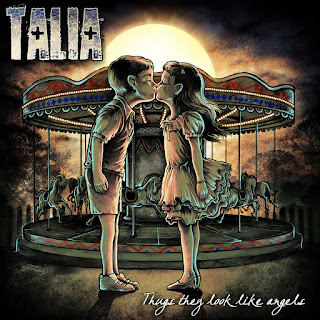 This three-piece band from Los Angeles and Paris, France is another band that takes their sound from the ‘90s when punk, grunge and rock collided and gave us the alternative rock nation. The lucky thing is that this band takes that and runs into the present with enough energy and talent to surpass a lot of bands from back then that were just generic and boring.

The sound on this album surprised me, it was tight, angry, but not bitter and jaded or bored sounding like the ‘90s bands, instead it had the ability to take the anger and play furiously and with heart. Opener “American Bride” is a catchy and tight piece of music that instantly gets the chorus stuck in your head and was the perfect song to start the album with. The band hits the ground running and makes you look forward to the rest of the album. After the slower, but not slow song “Play Dead,” they come back with “It’s Been Oh So Long.” The song is more in the punk vein with its fast pace and gritty sound. The bass is thicker than fog in London and the energy could light up the city. The album definitely brings to mind the ‘90s, but luckily they manage to keep things interesting enough to make you want to hear more and not think that they are a bland knock-off. The energy and raw talent that is present really takes the songs up quite a few notches from the generic music that is out there passing for rock nowadays. “The Flood” is the only slow song on the album, but it’s not a bland song by any means, it’s just slow, but done really well and a nice change of pace from the rest of the album.

The album really has a lot going for it and with songs played as tightly and with the passion that you can not only hear, but feel, it makes for a great listen. This is the kind of album that you can put on when you are having a party and it will keep the vibe high and get the drinks flowing.