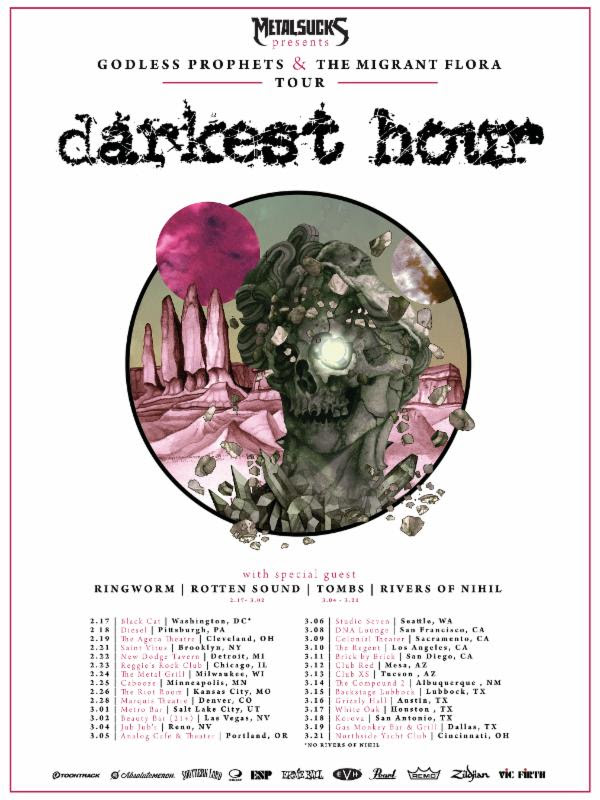 Pennsylvania progressive death metal unit RIVERS OF NIHIL will begin a month-long US tour tomorrow supporting Darkest Hour. The MetalSucks-sponsored journey will commence February 18th in Pittsburgh, Pennsylvania and run through March 21st in Cincinnati, Ohio. Additional support will be provided by Ringworm as well as Rotten Sound and labelmates Tombs on select dates.

RIVERS OF NIHIL continues to tour in support of their Monarchy full-length, released last year via Metal Blade Records. Monarchy picks up where the seasonal concept that began with Spring on the band's debut, The Conscious Seed Of Light, left off, this time, welcoming the oppressive Summer heat. Said primary lyricist Adam Biggs, "The Earth has been transformed into a vast desert wasteland, where after aeons of lifelessness, new beings begin to take shape and begin their journey as shepherds of the planet. But after a while, a class system forms from a sun-worshiping religious dictatorship, and these beings start to lose their way. Only the guidance of an ancient earthly force can help them save themselves as well the planet."

"Monarchy is not only their darkest record to date," said Outburn of the release, "but their most dynamic, atmospheric, and powerful." Metal Injection concurred calling it an, "excellent slice of technical death metal... With Monarchy, RIVERS OF NIHIL have evolved into a monster." Heavy Blog Is Heavy gushed, "Monarchy is the gold standard for extreme, technical, progressive, and passionate death metal right now, and it probably won't change any time soon," while No Clean Singing crowned Monarchy, "a pinnacle of the band's union of atmospheric and progressive aims." Added The Sludgelord, "It has everything which makes tech death great and offers a total listening experience to the casual or dedicated fan. A musical tour de force."