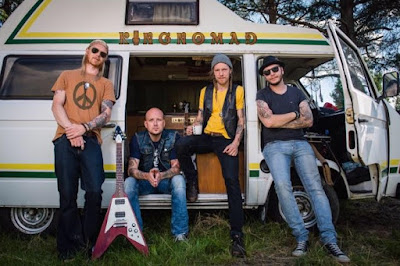 A day or two late, but not any less great!

We hope you all enjoyed the tracks that Freedom Hawk put together for their Ripple Recommends playlist in January and we want to give a huge thanks to everyone who has already purchased a copy of “Sunlight”. If you missed their playlist, check out the archived version @ https://open.spotify.com/user/ripple-music/playlist/0TlM4LSg8OwAe9EGhn5EJ0  And if you missed the announcement of “Sunlight” dropping last weekend, find your copy @ http://ripplemusic.bigcartel.com/products?search=freedom&submit=GO

February’s edition of Ripple Recommends features a playlist by Sweden Doomsters Kingnomad. In celebration of their debut full length album, “Mapping the Inner Void”, the band sat down and compiled a list of songs that truly mean something to them. And to accompany the playlist the guys wrote down thoughts as to why they selected some of the tracks.

Give the playlist a listen at the link below, read their thoughts and tell the band what you think. Then on February 24th don’t miss out on picking up a copy of the album @ http://ripplemusic.bigcartel.com/products?search=kingnomad&submit=GO or https://ripplemusic.bandcamp.com/  Album will be available in CD, Vinyl (standard black or clear vinyl with red inside and black/yellow splatter, shown below) and Digital formats as always. 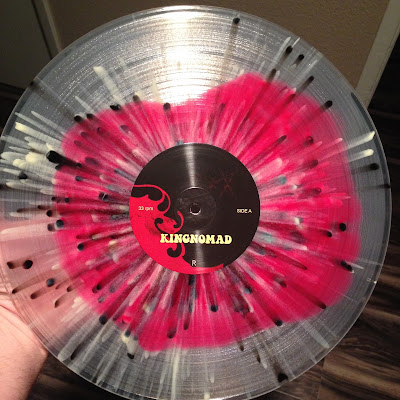 Find the Kingnomad RR playlist on Spotify @ https://open.spotify.com/user/ripple-music/playlist/2Vpc30jMGB5JBUHXQBHFUR and then read below.

(Jay) Genesis - Watcher of the skies: I’m a HUGE fan of progressive / symphonic rock from the 60 & 70s and Genesis is just of the best bands that ever existed.

(Jay) Genesis - Dancing with the moonlit night: Perfect music by perfect musicians, Phil Collins is a monster behind the drums!

(Jay) Peter Gabriel - The Veil: Mr. Gabriel is a genius. Period. Just too bad you can only find his soundtrack stuff on Spotify.

(Jay) David Gilmour - A pocketful of stones: I´m a huge Pink Floyd fan, but that would be too obvious to post. So, Mr. Gilmours solo work can often be overlooked in these cases, and his On an island album is a true masterpiece.

(Jay) Sting - The soul cages: The album that made me forever fall in love with Sting. A conceptual album that arose from the death of his parents, another masterpiece!

(Jay) Yes - Siberian Khatru: The trouble here was witch Yes song to pick? Every Yes lineup offers something unique and superb, well, the Close to the edge album is after all one of their best.

(Marcus) Coven - White witch of Rose hall: Groovy & evil music from the late 60s. I remember how blown away I was when I heard them the first time.

(Jay) Trevor Rabin - Anerley Road: I adore the work he did with Yes, and his solo work is just as stunning. But this album "jacaranda" is something else. Here is a man who knows how to think outside the box. It’s beautiful, brilliant, and so full of the joy of playing music!

(Marcus & Andreas) Ghost - Elizabeth & Ghuleh / Zombie queen: Kingnomad have two bands to thank for its existence - Ghost & Orchid. The first time Marcus played Opus Eponymous by ghost for me I felt something I haven't felt in years and years, love for music! My love for music wasn't dead, it was just slumbering. Someone out there was berating new life into a genre that I thought was lost forever.

(Jay) Rick Wakeman - Part 1-The warning: From the album No earthly connection. This is just superb progressive/symphonic rock. This is actually a masterpiece, and there are very few of those in the world I´m sad to say. (I have mentioned three masterpieces on this list, and I think there might just be seven in total).

(Max) Orchid - Capricorn: Here is the band that made me and Marcus realize that you can still make new music that sounded old but still fresh, vigorous and full of old school evil. We wanted to do that too!!!

(Max) Annot Rhul - Leviathan suite: A band that brings something unique to the table. There is a fine line between retro and progressive, and this dude nails it! Think Beatles taking black evil acid and going down the rabbit hole to dine with Cthulhu. This is the best band you never heard!

(Max) The Grateful Dead - The golden road: The band that will never get old for me, the band that I can always return to, no matter the mood I´m in, and no matter where I am in life. I am a Dead head!

(Max) MC5 - Call Me Animal - Primitive boogie filled with constructive rage and
treble. A band equally important now as then.

(Max) Merit Hemmingsson - Gånglåt från Ovanåker - The heritage from my mother.  In my opinion one of the best records, ever. Originally an old folk song, here in the sound of 1971. The only bad thing about this song is that it is so short. (Not On Spotify)

(Max) Jan Johansson - Leksands skänklåt - The heritage from my father. Recorded 1962 in Stockholm, and also this originally an old folk song. Piano, double bass and a whole lot of soul. The most selling Swedish jazz album of all time!

(Max) Santana - Batuka - After seeing the Woodstock movie in my teens I discovered the early years of Santana, and it's a bomb! Carlos aggressive sounding Gibson SG and a band to die for!

(Max) The Rolling Stones - Stray Cat Blues - The reason I love the Stones lives in this song. The dirty beat, like an elegant tramp out for a stroll. Always brings forth the androgynous side in my dancing.

(Max) Jethro Tull - Cross Eyed Mary - The year that always comes back to me, both in vehicles I've bought and records I like - 1971! I remember getting this presented to my when I was 16 by a friend’s father, who've owned the record since new. Cross Eyed Mary, with the chorus, built up by riffs. So heavy, but still so swift!

(Max) Dungen - Häxan - New album from one of my favorite bands. Swedish.

(Max) Blue Öyster Cult - Career of Evil - The classy way to be unclassy.

(Max) ABBA - My Mama Said - A not so famous song by Abba, with excellent bass play by Rutger Gunnarsson. Listen to his playing on all their songs is well worth the time, a legend on for strings!

(Max) The Raveonettes - Chain Gang of Love - Love and decadence for all!

(Max) Love - Alone Again Or - Walking on snow filled streets, many years ago, in a town many miles away, in the middle of the night with Arthur Lees voice as company.

(Max) The Cramps - Bop Pills - Me and a friend had a bar, a band and a fucked up apartment together. This was our song of risqué! Him pouring up beer and me serving them, strutting on the bar counter.
Posted by The Ripple Effect at 12:30 AM