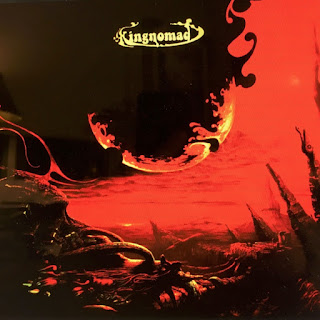 The forests in the north of Sweden are dark and vast. Half of the year the sun hardly rises above the horizon. And out there in the wild lurks this beast called Kingnomad. The first sightings of this monster was reported about two or three years ago when the sounds of the calling of "Lucifer's Dead" was heard through the Internet. And this behemoth later manifested itself to us on the EP "The Green Meadow" and as part of the Ripple vinyl series "The Second Coming Of Heavy: Chapter III". Now the time of Kingnomad really takes its beginning as "Mapping The Inner Void" is revealed to the world in all its glory.

And glorious it will be. This is an album that judging only by its cover by artist Anders Muammar is going to be epic. I turn up the volume to 666 and let the soft piano intro of "Lucifer's Dream" take me away to another realm beyond reality. Everything around me disappears. This is the land of Lovecraft. Tales of worlds beyond our imagination and the dark corners of human consciousness. It is a mind expanding journey where the music on the album is so well composed not only as individual songs but as a whole. It is truly epic. A nice retro feel to it with stoner vibes yes but there is also this strong presence of progressive rock that I really appreciate. And it is all tied together with an excellent production that gives the music all the justice it deserves.

And all the planets are aligned for this. Because this is one of those albums I can't wait to get a hold of on vinyl as the music, the sound and the album cover art will make such a great over all experience. And it is all released by the mighty Ripple Music. Praise Pike. Praise Iommi. Worship Kingnomad!