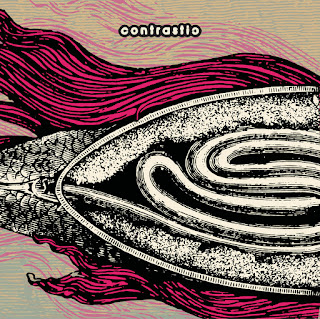 Everyone needs a reminder now and again waveriders.  For some those reminders are work related.  Others require a gentle tap on the shoulder to make sure they don't lose themselves to one pleasurable pursuit or another.  Speaking for myself, I readily admit that from time to time a not so gentle admonition to listen to music belonging to a genre I typically neglect is vital.  If not for these suggestions I would miss out on bands like Contrastic and their newly re-released self-titled LP.

Alright, who wants to talk about grindcore?  Ultra-fast songs, massive distortion, cookie monster vocals...you know, the good stuff!  While I enjoy and have reviewed a couple of grindcore bands on this site (Total Fucking Destruction and Beer Corpse spring to mind), by and large I leave that genre to other writers.  Not this time however.  Contrastic is simply too good!  Not only are they good, they're weird as well, and that makes them stand out from the crowd to my ears.  What makes them weird?  Good question.

Let's start at the beginning.  Opening track "War Laws?" lays down almost a minute and a half of what sounds like sinister midi music before the actual band joins the fray.  Even then the song better fits the mold of sludged-up death metal than typical grindcore.  Only on the second track, "Verschrottung Durch Arbeit", does the listener encounter the expected blast beats.  This pattern of experimental track followed by more standard grind repeats throughout the album's thirty minute run length.

The thing is...just when you think you know what to expect Contrastic throws a curveball your way.  Would you think proper piano accompaniment would enhance a grindcore song?  Take a minute, literally, and listen to the song "Chopins Ulcerous Colic".  You might be surprised.  Sticking closely to the piano theme "Unattractive 'M'" features an organ for thirty seconds smack dab in the middle of the track.  "Sex With Four Walls" begins with title-appropriate wah peddle work before transitioning into a raging metallic whirlwind.

Waveriders this album originally hit the market back in 1999 or 2000.  I would like to take this opportunity to thank the folks at Horror Pain Gore Death Productions for reissuing this marvelous album digitally and on vinyl.  If not for their efforts I never would have discovered this gem!  Do yourselves a favor my friends.  Order a copy of Contrastic's self-titled LP and let the grind move you.