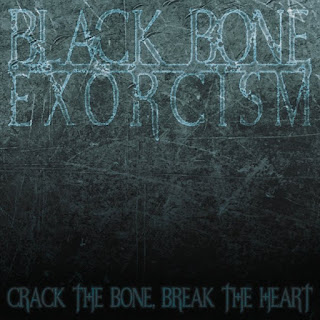 One of the things that I love most about music is that it can be very powerful. Music can move us and make us feel things like nothing else can. For me specifically, black metal is the genre of music that most often creates these feelings. While Black Bone Exorcism are not a black metal band, they create some very powerful and moving music that elicited the same responses in me.

I'm not sure how I would describe their music exactly. I could call it post-metal and that would be a good descriptor, but certainly not the only way to describe it. There are some elements of doom, it can also feel sludgy at times. I'm not a fan of the whole “recommended if you like” descriptions that records labels often use, but if you are a fan of Neurosis this band would work for you.

As I said above, this is powerful music. It grabs you by the front of the shirt and lets you know that this is music you MUST listen to. This is not background music that you put on while you putter around the house. Rather, this is music that demands your attention. Its a fair demand, because this is music that, if you give it your undivided attention, it will reward you. It is very intense, and that intensity helped me feel like the music was guiding me, and connecting me with things that are outside of our normal, usual realm. In a very real sense it is spiritual music. I felt that if I spent enough time with it I would connect with lost things, esoteric things, that are not a part of our daily lives, things that once were a part of us as human beings when we were much more in touch with the world around us and not so lost in technology, not so isolated from the natural world. It is music that I look forward to listening to over and over, each time moving a little deeper into it.

There are some stunning songs here. “To The East” is a master work of sorts. If you listen to this song at a surface level, it is deceptively simple. Basic patterns of just two and three and four notes repeat throughout, sometimes moving against each other and sometimes with each other as different instruments take up the patterns. However, if you let those patterns guide you and wash over you, it is a song that is meditative in feeling. It is very powerful.

“III” is also a very powerful song for me. There is a heaviness at work that almost serves to pummel you into submission and break you down so that you can receive the communications that it has in store for you. It is beautiful and emotive and evocative.  I had an opportunity to interview this band for my radio show and we spent a lot of time discussing their song writing processes. Some of these songs have taken years to write and the band feels that they are curating these songs and will only bring them forth when they are completely ready. I would heartily agree with them.

This is an amazing album and if you are open to the idea that heavy music can be beautiful, that it can show you way to things beyond, check this one out. You can pick up a CD from the band's Bandcamp site, and there will be a vinyl release a bit later this year courtesy of DHU.