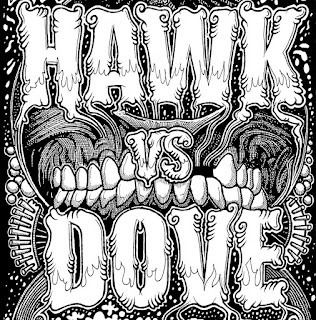 Alright ladies and gentleman today’s bonanza features just one band. In order to get started I feel it necessary to talk a bit about the art of presentation. For one Hawk vs. A lot like the contrast of the two birds, the black vs. white plays a part in the presentation of Hawk vs. Dove on the bandcamp feed. While the hawk exhibits power and grace, the dove promotes innocence and naiveté. The art is rather complex and artful while maintaining a grounded presence using just black and white. Maybe I’m rambling to deep, in fact yes, I am rambling but the point is, these two albums have a way of catching your eye which bridges the gap between your ears.

Now before we get to the music, the next feature on their page is the band’s bio or description of their own music. Whether they wrote it or had a “professional” compose the message, it says what you’d believe to be true of the band before even listening.

“Citing influences such as Earth, The Jesus Lizard and Boris, Hawk vs. Dove has a knack for gut-churning guitar licks, ominous tones and unconventional harmonies. Progressive without losing sight of nod-worthy songs, innovative without excess, they have a grasp on where heavy music has been and where it ought to go.”

For me, the descriptions, tags, and other reviews (if available) are a key driver on whether I am going to invest the time to push play and give the music a listen. Hawk vs. Dove have an intriguing start so far without even pushing play. The art is enthralling, the descriptions sound palatable and, although I’m not necessarily a diehard fan of any of the referenced bands, they do sound like a worthy combination. The alluring fact to me was that there was not a single supporter on the page which could mean a couple things. First, they could really suck and nobody would donate their support to such an act, second, they could have just put the material up on bandcamp and posted the original release date of such material, or it’s just the internet, and not everybody discovers everything at the same time. I tend to think with Hawk vs. Dove that it was a combination of the latter 2. Either way, at this point my mobile app was primed and ready with the latest album in the wishlist ready to listen.

What happens next is history. Immediately slathered with downtuned, distorted riffs bubbling up with enchanting melancholy from a boggy nest ‘Divided States’ takes flight with harmonious vocal passages eliciting a nostalgic 90’s vibe (The Jesus Lizard) and for me a nod to Jerry Cantrell with its haunting yet graceful harmony. The music is sodden with thick, demented riffs, polished with glimmers of shoegaze and oozing with inebriated Sabbath fuzz. There are numerous light and airy moments that have an almost Radiohead or Jane's Addiction feel to it without really sounding like either band. Just a nice touch of atmospheric gloom.

v      “Raging harmony stricken riffage swoops upon shoegaze crusted grunge like a hawk vs dove engaged in battle within a storm of passion. Heavy blues gone mad meets demented doom on quaaludes. This is one sick puppy!!”

As I finished up my first listen I was drawn immediately down to the self-titled where I noticed the availability of vinyl and again, nobody apparently in support as of yet. I got to the second song ‘The Sabbath’ before I hit the buy now button for a measly $20 including shipping and both digital versions of the bands discography. The album played on, my mind remained tickled with bliss, and I began the journey of spreading the gospel of this seemingly undiscovered band yearning for more attention. I think it’s already gaining ground as others have joined the good fight of keeping the spirit of underground rock and roll alive and well.

If you’re finding yourself perplexed on whether this is right for you, fear no more. The albums are up at a name your price offering in your choice of digital format included unlimited streaming via the mobile app. For the true blue addicts the self titled is offered up as described below:

v      Self-titled debut album by Hawk vs. Dove on 180-gram vinyl in classic black or dirty white. Cover art and lyrics insert by Larry Carey. 1st pressing limited to 200 copies!!
Recorded and mixed by Matthew Barnhart and David Willingham at The Echolab.

I went with Classic Black for those that were wondering. Black vinyl matters, but keeping to the theme of the artwork it’s also available in a dirty white. There is nothing not to like about this fantastic new addition to bandcamp so join the fun and add this band to your radar.