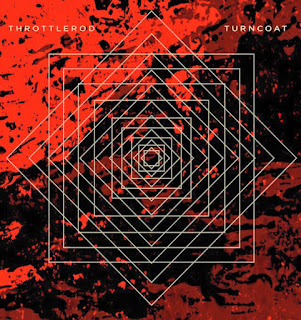 They fooled me waveriders!  The wool was pulled completely over my eyes when I began listening to Turncoat from Throttlerod.  You see the first song on the album lulled me into believing that this would be a solid, generic hard rock album in the vein of Deliverance-era Corrosion of Conformity and their ilk.  The truth is something different.  Not entirely different mind you.  Turncoat is wickedly solid!  No, it was my 'normal hard rock album' prediction which collapsed as I continued listening.

Beginning with the third song on the album, "Never Was A Farmer", the massive influence of 1990s alternative rock and metal on Throttlerod's sound begins to shine through with unabashed enthusiasm.  The tempo of the next few tracks is lowered and the vocals become of greater importance melodically.  Harmonies created remind me of Alice In Chains at times, Stone Temple Pilots at others.  The title track screams Nirvana to my ears until the four minute mark when the band can no longer restrain themselves and launch into a galloping riff-filled coda.

What is most interesting to me is that Throttlerod do not simply rely on grunge-y elements to help differentiate their sound.  Other metallic influences creep into the mix as well.  A couple of the main chorus riffs from songs like "Every Giant" and "Breadwinner" remind me of Tool.  There is a strong hint of System Of A Down in the guitar work at the start of "Gainer".  The bass in "Cops And Robbers" echoes the distorted tone I associate with Korn.  A strong vein of noise metal rears it's ugly yet glorious head throughout album closer "The Guard".  My point is that there is a lot to analyze and enjoy!

Waveriders, Throttlerod is a band that needs to be on your radar right now.  Turncoat was recently released on Small Stone Records.  This album rocks, and you deserve to rock right along with it!