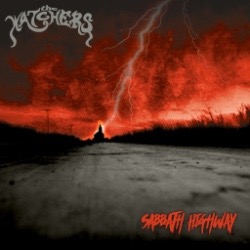 I put this CD in the player and about ten seconds later the first thing that came out of my mouth was “God Damn!!!”. It's been a while since I listened to an album that comes out swinging like this one. If you were ever a fan of heavy, late seventies/early eighties rock like Van Halen, Thin Lizzy, ZZ Top, Judas Priest, and so on, you will probably never take this one out of your CD player. I'm not sure I have the words to describe this one; it's that good. But I'll try.

First off, you could probably use this as your ED medication if you find yourself in that boat. Problem is you'd probably be headed to the ER with priapism every time you listen to this. Everything about this album is top notch. The songs are well written, the vocals are killer, the musicianship is incredible. The only problem with this release is that it's too short. You're left wanting more when the final track fades out, so you just let it play again.

“Sabbath Highway”, the first track, is a high energy blast of pure rock. Not many bands play heavy rock like this any more, which is a shame, because so-called rock radio could use more music like this. As if the song wasn't already a true gem, the guitar solo that cuts in like a laser and just levels everything in sight takes this one to a completely different plane of existence. There's a brief respite with “Requiem”, then we take off once again with “Call The Priest”. This one is a little slower but just as heavy with a guitar tone that could double as a sandblaster. Great stuff.

Next up is “Today” with a great opening segment that reminds me of an old school muscle car just smoking the tires before it rips up the asphalt. Nice work by the drummer on this one with a driving rhythm that keeps the whole thing moving right along. There's a little breakdown section that is very reminiscent of ZZ Top at their best. Then everything wraps up with “Just A Needle”, a slinky little number that, as I mentioned before, fades away too soon.

Get your hands on this one as soon as you can and you'll be one very happy camper. Who cares if its January, pop this one in the CD player in your car and it will feel like the best summertime jams you ever heard. Just maybe keep the windows up for a few more months.