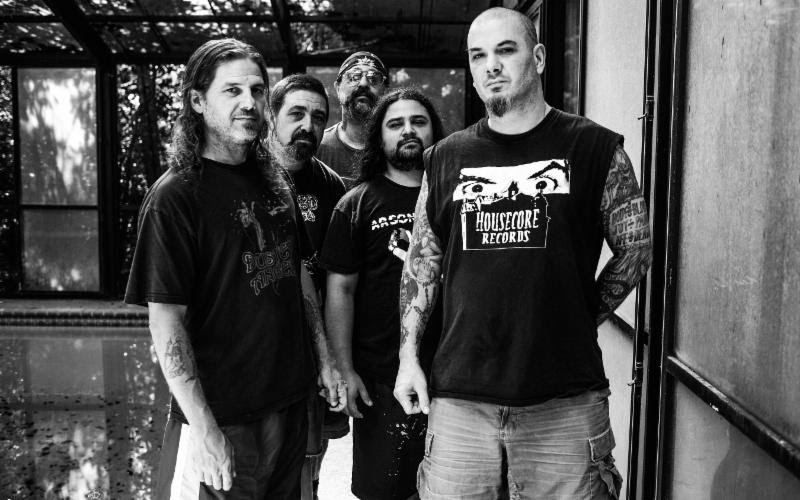 SUPERJOINT will kick of the New Year with part one of their US headlining tour. The band's latest journey, and first in support of their recently issued Caught Up In The Gears Of Application full-length will commence on January 12th and run through February 3rd with more dates to be announced in the coming weeks. Support will be provided by Motor City thrashers Battlecross and noise rock eccentrics/Housecore labelmates Child Bite, also of Detroit.

Additionally, SUPERJOINT will play the For The Sick Benefit, a three-day festival-style event organized for Eyehategod frontman Mike IX Williams, who underwent a liver transplant last month. The For The Sick Benefit will take place at Siberia and Poor Boys venues in New Orleans and will include appearances by Eyehategod, Crowbar, Goatwhore, Thou, Classhole, and many more acts bound together for the cause.

Watch a hilarious tour trailer at THIS LOCATION where you can also view the band's "Caught Up In The Gears Of Application" video.

In other SUPERJOINT news, frontman Philip H. Anselmo recently visited Loudwire's HQ where he was filmed narrating classic Sesame Street tale The Monster At The End Of This Book. Check it out HERE.

Various order bundles, including limited edition vinyl options and authentic woodwork from their "Caught Up In The Gears Of Application" video are available via Housecore at THIS LOCATION. For digital orders, point your browser HERE where you can also stream the record in full.

In addition to Anselmo claiming the cover of Decibel Magazine's December 2016 issue, Caught Up In The Gears Of Application continues to earn critical accolades from fans and critics globally. In a perfect 5/5 score, New Noise Magazine likens the band's rhythm section to a, "rapid series of punches like a Cajun boxer," furthering, "SUPERJOINT's variety of hardcore can have a strenuous relationship with jazz, as in the midst of Caught Up In The Gears Of Application's storm of nihilism is the sexy gospel of New Orleans jazz. SUPERJOINT's music is like a poison that you want to keep drinking, a spirit that doesn't age, and never heals - but it'll kill time. There is creative genius in these guys." Loudwire notes, "SUPERJOINT are looking to add a vicious and philosophical third chapter to the band's legacy." Of the title track, Metal Injection champions, "...a great mix of southern rock and hardcore punk... if Down ever got really angry and decided to knock out a punk record, this is what I imagine it would sound like." While Maximum Volume Music writes, "They may have dropped the ritual but they have kept the habitual as the ferocious New Orleans supergroup pick up where they left off after a 13-year gap."

Elsewhere the sentiment echoes. "The volatile, acidic savagery that the band is known for is just as present now as it was before they went on hiatus over a decade ago...," issues Metal Nexus. "Songs heaving with hardcore foundations and muscular musical swagger detonate and decimate everything within earshot as they creep down your auditory canals and crush your skull from within..." Two Guys Metal Reviews concurs, "Caught Up In The Gears Of Application is exactly what it needs to be: raw, vicious, and unrelenting. Everything that has made the Phil Anselmo projects great over the past few years is represented here... this man is one of the truly great forces in metal." The Sludgelord champions the band's collectively "gnarly and nasty music," that's as, "potent as ever," and a, "storming return." Adds Hellbound, "'Circling The Drain' is perhaps the best Bower riff he's written in a while, literally interpreting the song title with a circling, buzzsaw neckwrecker. Gawddamn! Tracks like 'Asshole,' 'Mutts Bite Too,' and 'Rigging The Fight' only thicken the toxic mixture. Revenge is a dish best served sludgy!"