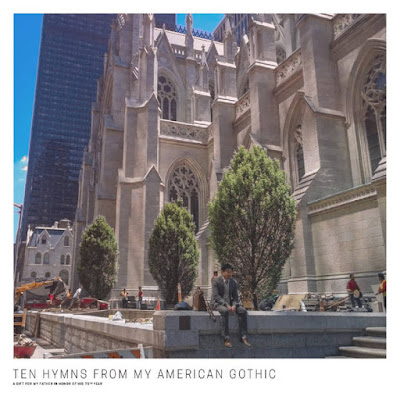 I'm not hip waveriders.  I'm not cool.  I don't keep up with trends or fashion my playlists based off of who is hot right now.  Why have I mentioned these character traits?  The answer lies in another question.  Have you heard of an artist named St. Lenox?  I certainly had not until I stumbled upon his latest release entitled Ten Hymns From My American Gothic.  Now I know and knowing is...you know the rest.

St. Lenox burst onto the indie scene a couple of years ago in 2014 with his debut album Ten Songs About Memory And Hope.  That album made enough of an impression on several journalists and publications to be named to their year end best-of lists.  Fast forward to 2017.  Based off of the evidence I have gathered this second album is poised to obtain much more critical acclaim and I have absolutely no issue with that whatsoever.  In fact, I'm going to do what I can to add more fuel to the fire because this album is absolutely stunning!

One of the highest compliments I can pay to Ten Hymns... is that it doesn't sound like anything else in my current music rotation.  Amusingly that uniqueness nearly made me dismiss this album.  My first taste of St. Lenox was the song "Fuel America".  It began with some tasteful piano playing accompanied by a drum machine.  Nothing out of the ordinary.  Then the vocals began and my ears informed me that everything had suddenly changed.

This incredibly powerful, resonant voice seized my full attention and I admit that I was taken aback.  A chuckle escaped my lips because I couldn't immediately draw comparisons to any other singer, but the distinctive timbre of Andrew Choi's voice wasn't the only element which gave me pause.  The lyrical delivery on each song does not conform to what I typically encounter.  Others have described it as 'stream-of-consciousness' singing and I can't disagree.  Yes there are repeated choruses but these songs have more in common with short stories than poetry.  Verses do not relate to each other except to advance the tales Mr. Choi weaves so well.  Upon first exposure these elements were jarring and I stopped listening.

Like all great music I've encountered however, that small sample was memorable enough to leap unbidden into the front of my mind on several occasions.  I revisited Ten Hymns... and quickly became completely enamored with this stupendous music.  If you have not heard of St. Lenox until now you are in for a real treat!  I mean, where else can you hear incredibly catchy songs about Thurgood Marshall or President Nixon?  Nowhere waveriders.  Nowhere but this album.  Listen and enjoy!