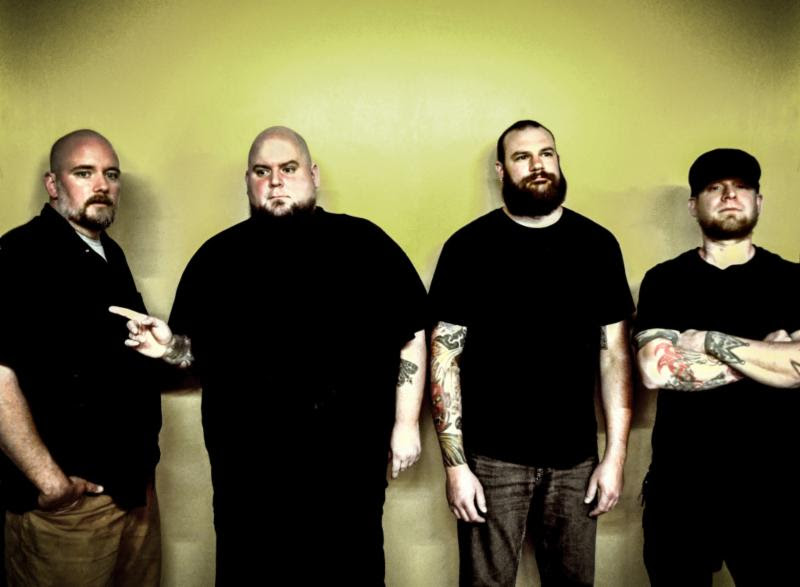 As a precursor to its official unveiling January 13th, today The Obelisk, who crowns LO-PAN the "best currently active purveyors of heavy rock in the US," is hosting an official premiere of second single, "Pathfinder." Calling the six-minute closer, "quite simply is the best song LO-PAN have ever written," the blog further elaborates, "there's really nothing simple about it, from the sleek and fuzzy bassline from [Skot] Thompson that opens to the backing volume swells of guitar (is that ebow?) that provide ambience as [vocalist Jeff] Martin and [drummer Jesse] Bartz kick in for the verse to the linear build that moves toward an apex as affecting as it is memorable, shifting after an airy solo circa the four-minute mark to a concluding movement that takes the energetic shove of 'Long Live the King' and the crashing gracefulness (yes, both) of 'Alexis' - which actually might be Martin's boldest performance here - and adds the laser focus that typified Colossus to finish out with maximum force while still remaining in complete control of the torrent they're making."

Read more and hear for yourself at THIS LOCATION.

LO-PAN's In Tensions will be released on 10-inch vinyl limited to 500 copies and accompanied by a one-hundred-page book featuring artwork by Chris Smith of Grey Aria Design as well tour diaries, flyers, and a complete collection lyrics from the band's previous releases: Sasquanaut, Salvador, and Colossus. Preorders are currently available at THIS LOCATION.

We Love Metal hails a, "serious riff fest," further championing LO-PAN's "down and dirty metal style," combined with, "hints of '90s alternative and maybe some Helmet." Two Guys Metal Reviews notes, "It's easy to get lost in this album simply because In Tensions demonstrates the sort of pulse that made records in the '70s so addictive. It's a sort of constant throb that winds its way through every song on the album and makes it feel even shorter than its five tracks would suggest. This is a good thing though - In Tensions rapidly becomes highly addictive, an album you wrap up and then can't help but want to jam again," while PureGrainAudio notes of "Long Live The King" specifically, "The track begins with a fuzzed-out, driving bass line and then a Soundgarden-esque riff jumps on top of that. Jeff Martin's air-raid siren vocals are showcased in stride and there's a drum groove that glues everything together."

Recorded in Columbus, Ohio by Joe Viers, with mixings duties split between Jonathan Nunez (Torche, Shitstorm) and Ryan Haft (Wrong, Capsule) in Miami, and mastered in Chicago by Carl Saff (Big Business, Helms Alee, Russian Circles), In Tensions is a sonic masterpiece created across multiple time zones - the fruit of relationships forged through the band's unending dedication to the life of touring road dogs.

LO-PAN also hit a major touring milestone in 2016, having logged over 250,000 miles on their original van since 2005 - crossing the country countless times over on headlining tours and supporting the likes of Torche, High On Fire, Weedeater, KENmode, Whores, Fu Manchu, Atomic Bitchwax, Black Cobra, and Bongzilla. Not surprisingly, they've become one of the most ferocious live acts in American heavy rock as a result.

And with In Tensions, they show no sign of slowing down. A full US tour in support of In Tensions is expected this Winter along with a European tour in the Spring of 2017.