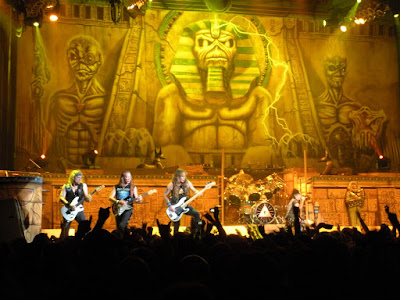 A white Honda Civic brakes to a stop and four intrepid travelers exit to a gravel lot full of rockers, stoners, and metal heads. The usual smells of cigarette and pot smoke, and stale beer mixes with the exhaust fumes and assaults our nostrils, as we saunter toward the destination: the Concord Pavilion.  Road weary and traffic beaten from the long journey from the South Bay Area, we form up to climb the hill that takes us toward the venue: I in my combat boots, camouflage fatigues, and leather jacket; my brother Rob, in jeans, Maiden t-shirt and sunglasses; Jim in his jeans, flannel shirt and Kangol hat; and Aaron in his jeans and hoodie. After a quick trip to the paraphernalia tent (I got two new Maiden shirts to add to the collection; Rob a "Maiden England" keychain), we quickly wolf down some overpriced dogs and burgers and make our way to the front of the stage. As we have arrived late, there is already a throng of headbangers there, nonetheless we take up position a short ten yard toss from the front at stage right. 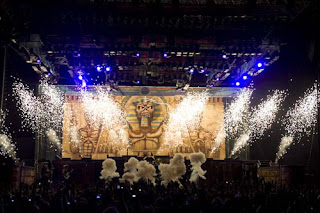 The crowd is tense with anticipation as folks move toward their seats, sensing the time is near. Then the first few notes of UFO's "Doctor Doctor" come over the PA and the crowd begins cheering as Michael Schenker and Co. tear through the classic that is the staple announcement that "Maiden is taking the stage." As the music fades, the lights go down and the opening notes of "Transylvania" come up with a video montage of the band flying on "Ed Force One" their appropriately named jumbo jet with the band's iconic angular logo painted along the fuselage, piloted by none other than Capt. Bruce Dickinson himself, as they travel to and from the gigs on the first leg of the "Somewhere Back In Time" tour. The music fades again and the familiar voice of Sir Winston Churchill rasps "we shall go on to the end, we shall fight on the seas and oceans, we shall fight with growing confidence and growing strength in the air..." still verbally shaking his fist at the Reich after all these years, as video footage of the Battle of Britain plays on the screens. BOOM!!! The stage explodes with fire, lights and sound, and we feel the blazing heat from the pyro, and the thunder of the PA as the band rips into "Aces High." Bruce is running full speed around the stage from this side to that, Janick Gers is swinging his Stratocaster wildly and Steve 'Arry' Harris is taking imaginary rifle shots with his bass guitar as the Maiden machine hammers through the opening track. Adrian Smith and Dave Murray are picking along with perfect precision as Nicko McBrain steadily pounds along driving the pace from behind a wall of drums. 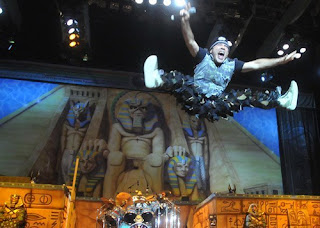 "Scream for me Concord!!!" Bruce commands at musical intervals and we all throw our fists in the air as we obey the ringmaster, who is in better voice than I've heard him since 1987. The band is tight musically but loose in that "they're having fun up there" way that all great bands do. As they tear through classic after classic - Two Minutes to Midnight, Revelations, The Trooper, Wasted Years - we are seemingly transported back to 1988, when Iron Maiden ruled the heavy metal universe and arenas sold out in minutes in their mighty wake (as most have on this tour!). Between songs, Bruce talks about the tour and thanks the old fans for still supporting and for bringing the "new younger faces" as well, welcoming all the newly initiated generations into the Maiden family. The stage lights dim and the spotlight is on Dave and Steve as they begin the intro to "Number Of The Beast" when the stage suddenly explodes with fire and light as the song picks up. As the song ends the stage erupts in devilish red fire, to the delight of the sweating cheering multitude in attendance. On this night of nights even the deceptively complex radio hit “Can I Play With Madness?” is no problem as Adrian and Steve hit their vocal harmonies closely on the chorus-a feat not always easily accomplished. Bruce mentions something about old poems and then the band launches into the epic "Rime of the Ancient Mariner" complete with fog and eerie ship backdrops. Then the evil laugh of the Pharoah as the hard driving "Powerslave" leads into the bluesy intro to "Heaven Can Wait" complete with select audience members joining the band onstage as the choir singing "oh oh ohhh!" during the bridge. Then the crowd goes wild as Nicko thumps out the familiar beat and Bruce sings "the white man came, across the sea..." and then screams for us to "Run to the Hills!" 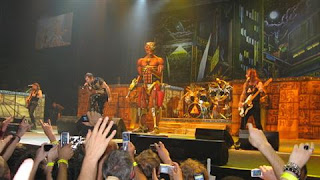 Band and audience are raised to fever pitch as the lights go down and the spotlight is on Bruce as he tells the story of the “man who walks alone” in the eerie and frightening “Fear Of The Dark.” Then, like a razor through flesh, heads begin to bang as Dave Murray’s Stratocaster begins the maddening repetition of notes and Adrian Smith joins in harmony as the “Iron Maiden” swears to “get you no matter how far.” As the band finishes the set, they stroll offstage to the chant of "MAI-DEN, MAI-DEN, MAI-DEN..." from the 21,000 odd souls in attendance. As the band returns for the encore, Dave strums an acoustic guitar as Bruce joins in "Seven deadly sins, seven ways to win..." and the band accelerates into the opening song from Seventh Son of a Seventh Son, "Moonchild." Steve demonstrates his legendary bass prowess as he simultaneously plucks and strums the beginning of "The Clairvoyant" which the band tears through as the "cyborg Eddie" from the cover of Somewhere In Time ambles out on stage with laser pistol in hand to have some fun with the band members not playing guitar solos.

Then it's on to the finale, as the bell tolls, and Bruce is sitting in his "cold cell" sorrowfully singing the opening verses of "Hallowed be thy Name." The crowd goes wild as the two halves of the sarcophogus separate and a newly reborn giant mummy (literally, they said that the original one from 1985 had completely disintegrated!) emerges to terrorize (or humorize!) the crowd. Then, with a last blast of heat from the pyro, a last flash from the stage lights, and a final blow to the eardrums, the band crescendoes up to the sky, then crashes to a furious ending. The crowd screams and claps, throws horns, and cheers some more as the band gives their goodbyes and leaves the stage, and four intrepid travelers are left stunned and awed at the awesome power of the juggernaut that is Iron Maiden. 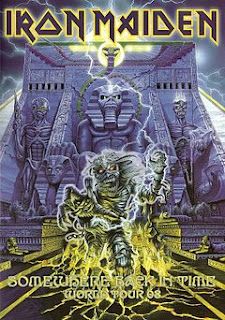 Email ThisBlogThis!Share to TwitterShare to FacebookShare to Pinterest
Labels: aces high, can i play with madness, hallowed by thy name, Iron Maiden, moonchild, number of the beast, Powerslave, run to the hills, scream for me concord, somewhere back in time tour