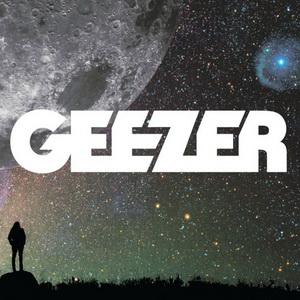 On their past releases, Geezer have been rather like a shy stripper. We’ve gotten a peek at this, and a glimpse at that, and we’ve all pretty much come to the conclusion that when we got to see everything we’d all be weak in the knees. Along comes this beast of an album and we finally get the full monty and we just can’t stop staring. It’s just flat out more spectacular than we could’ve ever imagined.

This is a band that seems rooted in the blues, but the trunk and branches feel free to move in different directions and take us to interesting places. This is fuzzed out, heavy music. You can almost feel the dankness crawling out through your speakers, and if some cannabis smoke happened to start curling up off the turntable, you wouldn’t be surprised by that either. This is the band you hope is playing at your local watering hole when you’re 5 shots and 3 beers into your Saturday night and shit’s about to get weird.

“One Leg Up” is one of those tracks that I could put on a loop and literally listen to it all day long.  This song has some sort of pungent magic. It’s basically just one long groove, just a one riff song that the band have described as their tribute to Iggy and the Stooges. I mentioned weird a moment ago; how about a line in the lyrics that goes “I got a bag full of donkey teeth”? I mean, what the hell man? What does that even mean? You have to hear this song to appreciate just how good it is, so if you haven’t checked it out yet, do so.

“Sun Gods” and “Bi-Polar Vortex” are some amazing fuzzed out, blissed out jams that just seem to ebb and flow in just the right way. They both clock in a little over eight minutes, and when you are listening to them you just don’t want them to end. Yet they both also seem to end at just the right moment. I tell ya, there’s some alchemical stuff going on with this release.

“Dust” needs a little nod as well. It’s got a very tasty Middle Eastern flavor to it (are we allowed to talk about Middle Eastern things now that Trump is in office?) Another song that just jams along, not like some jam band where everyone is playing 100 notes a minute, but more of a stately, medicated type of jam, the kind where you just want the band to go through that passage of music one more time, and then another time, and then another time……

If you are a collector or complete-ist you will want the CD and vinyl both, because each version shares seven tracks and each has a different bonus track. You can find the CD at Ripple Music and the vinyl, if there are any copies left, at STB Records. Add this one to your collection, friendzos, I promise that you’ll go back to it time and time again.