Formed in 2015 and first hitting the stage in March of 2016, Blood Mist has been on a tear of performances sharing the stage with acts such as Valient Thorr, Black Lung, Gateway to Hell and others. This culminated the label inviting Blood Mist to record and release their debut EP in the Grimoire studio in Baltimore last September.

The self-titled 5 song EP features riffs galore, hard hitting drums, rippin' guitar solos, and over the top theatrical vocals. After helping us announce the release in December, JJ at The Obelisk described them much better than we could:

"Across the 25-minute outing, the relative newcomers show marked cohesion of purpose in taking cues from early, pre-self-parody Danzig as well as Candlemass, but even with those names as core influences, I wouldn’t necessarily tag them as only being a doom band. Certainly those elements are there, as one can hear by the chugging slowdown that finishes opener “Burn the Trees” as much as the foreboding guitar and cymbal wash interplay that begins the subsequent “Blood Mist,” but guitarists Kevin Considine and Nick Jewett, vocalist Matt Casella, bassist Scott Brenner and drummer John de Campos (also artwork) pick up into near-High on Fire onslaught later in their eponymous cut. With the sense of drama that Casella brings to his approach, in places calling to mind Scott Reagers as well as the likes of Witchfinder General and others from the NWOBHM, everything Blood Mist do on this offering just feels that much bigger." 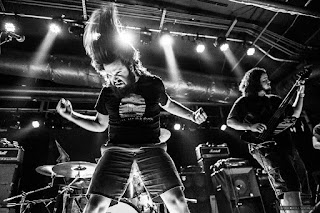