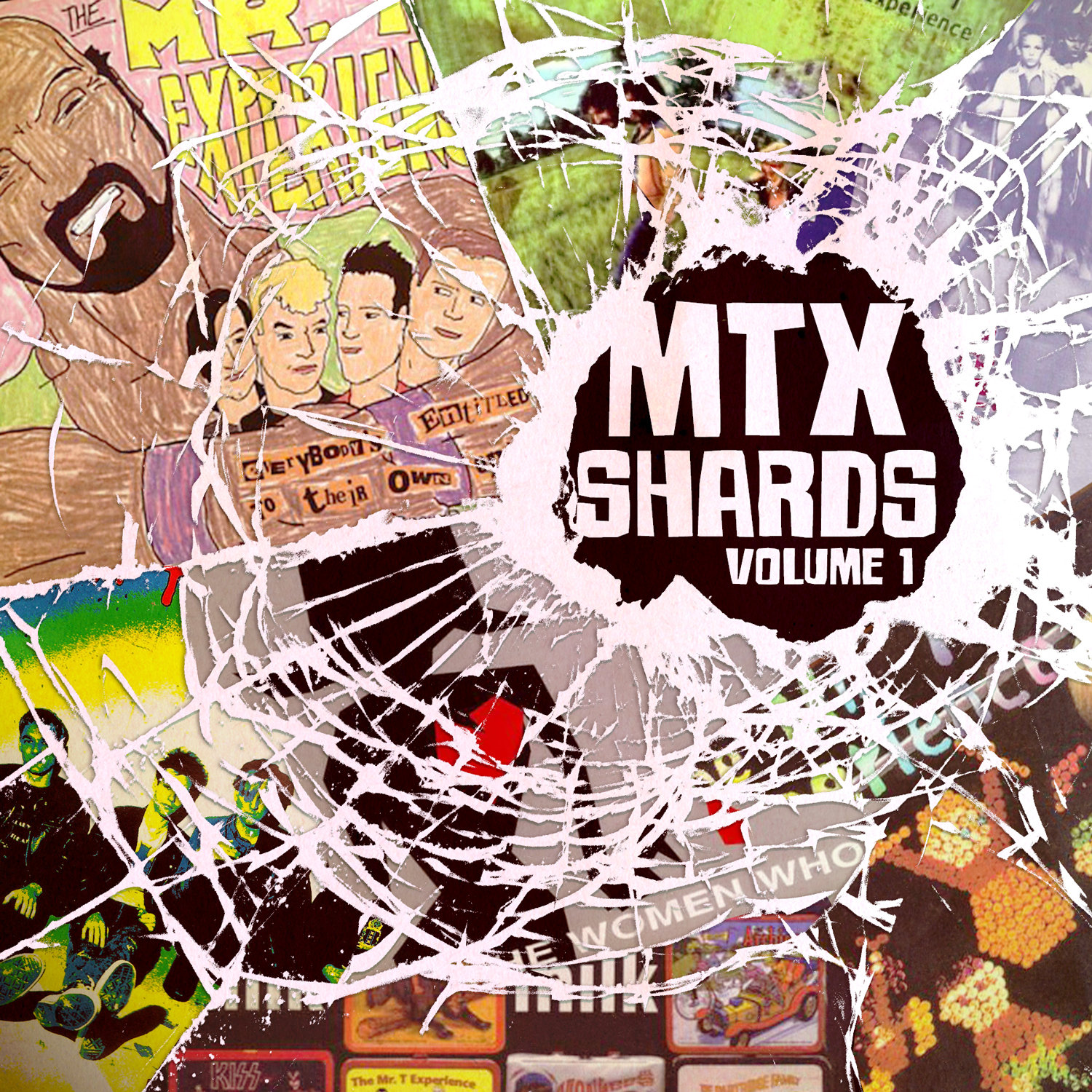 Mr T. Experience and Sounds Rad Records are teaming up once again for the digital release of MTX Shards Volume 1! Shards is a rarities compilation of hard to find, one off MTX recordings!

While they're at it, the two are also teaming up for a series of re-issued  classic MTX shirts from the past!

Here's the good Doctor himself with more on Shards & the classic shirts:

"So the tl;dr of this is:  we just put up a new, MTX digital album on iTunes/Amazon/etc.  It is volume one of what will be a two volume set containing all the extra songs that have appeared on various CDs as bonus tracks but haven't been available in the official online catalog till now.  16 tracks on each, 32 songs total.  It's called Shards (Vol. 1).  (Volume 2 is coming soon.)

Sounds Radical is offering a package deal where you can pre-order a limited edition re-issue of the classic MTX Starship T-shirt (with a pin, sticker, and poster) along with an immediate download of the album.  While supplies last!  Order on Oct. 31st to get the album download a day early! If you want in on that go here:  http://www.soundsradical.com/store/p33/MTX_Starship_T-Shirt.html   It will also, of course, be available on all the usual services like iTunes, Amazon, spotify, etc.

More:  when we first started putting out records in 1986, the vinyl LP, ep, or 7" was obviously the main release, the "real" one.  When CDs came along, this didn't change. The albums were still side A and side B of the LP.  (For some of us, regardless of format, they still are, two halves, 20 minutes each or so.)  The CDs were seen as an adjunct to the vinyl version, and, like a lot of bands, we used to pile on any available extra tracks in a more or less archival spirit without much (or any) thought given to aesthetic cohesion.  The idea was, why would anyone want to pay more money for a CD of this when you could get a perfectly good LP -- better give 'em something extra to justify the extra expense.  (Though in some cases it's not at all clear that these extra tracks added value rather than subtracted it.)

Anyhow, the result was, in the end, a mess, and a blurring of the line between the albums per se and the morass of extras. (e.g., the crazy track listing of the Our Bodies Our Selves CD, where the obvious ending song "Game Over" is succeeded by three cool but random extra tracks (one of them inexplicably moved from the main album to the end) with "Swallow Everything" shoehorned in between "More Than Toast" and "Not Guilty" -- because they were recorded in the same session?  And then there's a hidden track at the end of a big space of silence after "God Bless America"... Clearly, the product of a madman, if not several madmen.  Yet I know that many people think of this nutty CD as the actual "real" album.  And maybe it should have been, in that some of the crammed-in songs are many people's favorites.  But, it wasn't.)

So when, in the wake of Lookout's exit, we re-organized the digital back catalog, we decided to restore the original vinyl track listing and sequences of the albums, eps, and singles.  While many of the CD extras had been b-sides that had been included on their respective singles in the re-organization, this left out a great many previously released songs (thirty-two, to be exact.)  Some of these were quite "important" ones too, like "King Dork", "We Are the Future People of Tomorrow", "Unpack Your Adjectives," as well as a lot of fun covers and such.  The plan was always to compile these into an Odds 'n' Sods / Relics type album, but what with one thing and another, that plan hasn't happened till now.

I've tried to arrange the tracks as albums that can be listened to as such, eight songs to a "side" in the traditional manner, rather than chronological archives.  They are from various sources, (covers comps, out-takes, demos, one live on the radio song) spanning 1987 thru 1999.  The criterion for inclusion when it comes to the out-takes and demos is simply whether they have already appeared (and subsequently disappeared from) somewhere.  I have however left off the terrible sounding live cassette recordings that were on the Making Things with Light CD;  they were just messing everything up like they always have.  (They're easy to find if you must have them, and in fact, I can even sell you a CD if you want one of those:  drop me a line at themagnificentdrfrank@gmail.com)  As for the demos and out-takes, maybe one day I'll find the machinery and the gumption to re-examine those tapes and see if there's anything else interesting on them, but that's for another time if it ever comes.  For now, this is what there is.  You can get the whole thing at once, or song by song as needed.  Or not, as the case may be.  Just putting it out there, as it were.

Finally, big, heartfelt thanks go to our good friend Pete Mattern at Planet X Recording Studio for mastering the comp.  You'll probably be surprised how good it sounds, especially considering the sources."

Purchase MTX Shards Vol 1 from Sounds Rad Records at:
http://www.soundsradical.com/store/p34/Mr._T_Experience_-_Shards_Vol._1_.html
Posted by The Ripple Effect at 12:30 AM