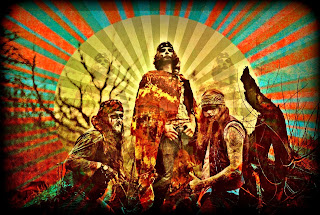 "Silly name or not, I’ll take this shit any day of the week" - The Obelisk

"Will take you from clean shaven to massive, dirty beard in under 30 minutes"
- Sludgelord

The London band (including former Dopefight frontman Owen Carty) have been turning heads on the UK’s burgeoning underground scene not least because of their combination of tie-dye and corpsepaint, but with a staggeringly heavy live show that has everyone who sees them agreeing that they’re about to become huge. 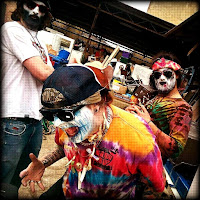 In the video for Mother Chub, CTBKM channels the Wu Tang Clan and their other 90s hip hop heroes for the type of music video you only ever saw when you woke up on the couch at 4am after a bad batch of brownies.

The band’s tongue-in-cheek approach belies their dedication to all things heavy and riff-shaped. A jaw-droppingly powerful live band, Bad Kush have already completed two European tours and repeated circuits of the UK’s underground scene since their inception in late 2014. Having supported the likes of Slabdragger, Dopethrone and Honky, audience members have picked up on the band’s vibe and now blow bubbles in appreciation of the band’s heaviest riffs.

Check out the video at this link: https://www.youtube.com/watch?v=VPV3cUy4vQs
Embed Code:

Chubby Thunderous Bad Kush Masters will be recording and releasing their debut album in 2017 through Riff Rock Records. Catch the band live before they go into hiding to finish recording:
3rd December 2016 - The Unicorn, London
22nd April 2017 - Rebellion, Manchester

Created in 2015 to cherry pick the very best of underground heavy music and to bring it to a wider and more mainstream audience, Riff Rock Records has already achieved acclaim with its first signing - Vodun.
Posted by The Ripple Effect at 8:30 AM