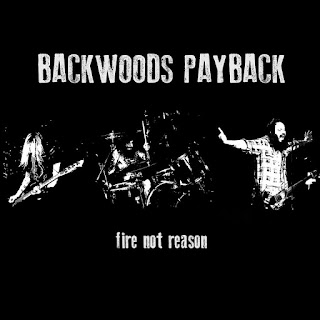 There was upheaval within the Backwoods camp, prompting the band to "vanish" for a while, much to my sadness. However, Mike Cummings and Jessica Baker stealthily regrouped bringing in Erik Larson - Alabama Thunderpussy, Hail!Hornet, et al - on drums, turning the band into a powerhouse trio. A reshaping of the sound occurred as well, but don't fear fellow Backwoods worshippers, they haven't gone mathcore on us. No, instead they have souped up the engine, turning it into a monster machine. Blending punk, stoner and neck-breaking rock with their own beautiful sound, and going for even more cleansing, cathartic and angry lyrics, Backwoods Payback has struck a goldmine. I've followed the band for a long time and have witnessed them tweak their music slightly with each new release, moving them forward and ahead of so many others, while retaining their original foundation. This same transition, or tweaking, is so vivid on 'Fire Not Reason' and I love every second of it. Also, having the band back is alone a magnificent bonus but then add this new album and euphoria sets in and it won't let go.

No holds barred, opener 'Elephants' unleashes the fury from the get-go. Upfront and personal the band goes full tilt aided by Mike's angry yet delicate voice. A strange but beautiful concoction which lends a guiding light to what 'Fire Not Reason' has in store. Short, sharp and furious, ‘You Don’t Move’ stampedes like a herd of raging rhinos. Brief moments of respite is offered here and there, but by the drop of a hat you’re pulled back into the maelstrom. ‘Dirge’ is slow, sludgy and sinister and a hell of a mindfuck. That latter part is further enhanced by Mike’s Chris Goss-like eerie singing. Backwoods Payback reels me in hook, line and sinker in between bursts of mayhem. Claustrophobic yet liberating in all it’s grief. 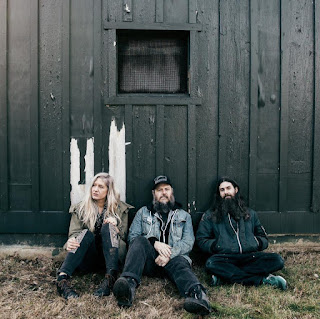 The band sort of return to their early days on ‘Don’t Try’ bringing out a lot of stoner and punk vibes. Heavy on the riffs and a loud, tight rhythm section, the band pummels me hard and mercilessly and I can’t help bouncing off walls, taking in blow after blow. Nitty, gritty and dirty, ‘Tuxedo’ is a lovely amalgamation of stoner, seriously pissed off lyrics about dejection and betrayal coming at me at 180mph. Then it stops abruptly and becomes an eerie, haunted composition which builds up to jawbreaking crescendo. Musically, ‘Even Odds’ is sort of the odd one out being acoustic and all, but lyrically it ties everything together. To me it brings all the different emotions on the album together in a wonderful lament, and, by being acoustic, it brings the pulse down allowing you to deal easier with the ongoing turmoil. It might not necessarily help per se, but it’s an honest attempt if there ever was one and the song is so beautiful in all it’s sadness.

Led-heavy, slow and punishing, ‘That Dream Again’ is also trippy and paranoid. Sounds strange maybe, but Backwoods Payback are on point here which is even further enhanced by the sudden eruptions of a faster tempo, only for them to revert back and forth. It takes brilliance to weave it all together and make it cohesive and captivating. ‘Snakes’ is bluesy and groovy and goes wide open in the verses. More straightforward than the rest, it is still beautiful and serves a purpose. Closer ‘California Lean’ is full of spine-chilling riffs backed by a bone-breaking rhythm section performed in a groove filled maelstrom. But that’s not all because harmonies runs side by side with all this which, in my opinion, brings out emotions and reactions in a wonderful way.

Backwoods Payback are back waveriders, and they are taking the world by storm! I have never doubted their abilities or talents. The first time I saw them live was a defining moment for me and this is one of those rare bands who does what they want for themselves and the outcome is beyond words. No changes are big enough to alienate supporters, instead they want to challenge us to expand our own sonic universes. By retaining what is the core of Backwoods Payback and adding new twists and turns the music is for sure them but we, the supporters, have to open our ears and minds to the added dimensions they bring. And man, what is brought out on ‘Fire Not Reason’ is truly amazing. To come back in this fashion makes me marvel at what the band has in store for us next time. Because the well of greatness Backwoods Payback possess seems bottomless and I for one is eternally grateful.

Welcome back guys and thank you!