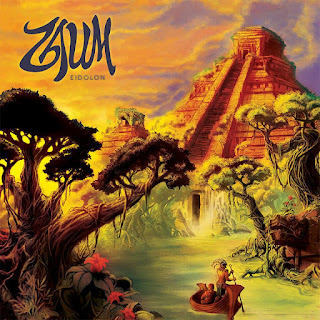 June 2014 changed my life within the music sphere drastically. A duo from Moncton, New Brunswick in Canada blew my mind wide open and altered the way I look on music forever. Yes, I am of course talking about the mighty Zaum and their amazing other-worldly debut, 'Oracles'. They are now back with their sophomore release and I couldn't be happier. Although that worry bomb feeling sneaked in: "can they build on the debut and move on even further", there was no need at all for me to doubt Messieurs McDonald and Lewis. The world of mysticism and grandeur they created on the debut is still here but so much more expanded. All your senses are treated to an experience it’s hard to put words to but I’ll do my very best. As great as ‘Oracles’ is, ‘Eidolon’ is even better and that is no mean feat. It takes certain musicians to pull off something like that and Kyle and Chris are those musicians!

Never ones to do anything half measured, Zaum put “only” two songs on ‘Eidolon’. Both are truly epic compositions clocking in at just over 41 minutes. From the moment ‘Influence Of The Magi’ opens the gates to the magical lost world inhabits, and all the way until ‘The Enlightenment’ closes the book for now, I am lost in a meditative, trance-inducing state of mind having been transported to a world of true wonder. Cleansing and cathartic as well as healing, no one can as for more in music. 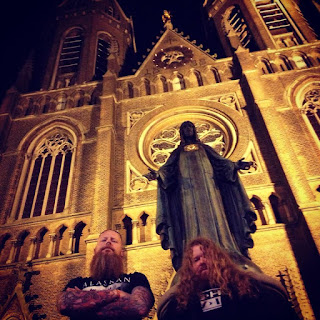 Immediately ‘Influence Of The Magi’ me under it’s spell and after barely two minutes, I find myself hypnotized by a chant-like voice, the shifting sound of the wind and the presence of something otherworldy. By the time the distorted bass guitar and drums kick in, I am under Zaum’s command. And when Kyle starts to sing, a vastness of glory and evil; of enormous power, wealth and knowledge, as well as insubordinance, fear and greed opens up before me. And it feels like I explode into a million pieces when the surge of this lost ancient world washes through me.

All of a sudden I find myself thrown into the center of the protagonist and antagonist of Zaum’s wonderful storytelling. Smells, visions, sounds and colours are amazingly vivid and as real as they possibly could be. Even though I see the real world around me while listening, the band holds their grip tight on me and as despite some frightful situations depicted within the story, I don’t want to let go. Please, let me stay in ‘Eidolon’!

Looking back in time, there are so many great albums, from all kinds of genres, that have hit home deeply with me for different reasons. Those are the ones I still go back to for guidance, to get inspiration, to feel better. You name it. ‘Eidolon’ has joined this fantastic group but in a way I’ve never experienced before. As mentioned above, I am transported to a world that is as magnificent as it is fearsome and still I don’t want to leave! The total experience of this album is beyond words even though I’ve tried to do it justice. And I am so thankful for the opportunity to take part in what Zaum is doing. Because…this duo is something else!

Email ThisBlogThis!Share to TwitterShare to FacebookShare to Pinterest
Labels: bass and drum, eildolon, hard rock, influence of the magi, Oracles, the enlightenment, Zaum